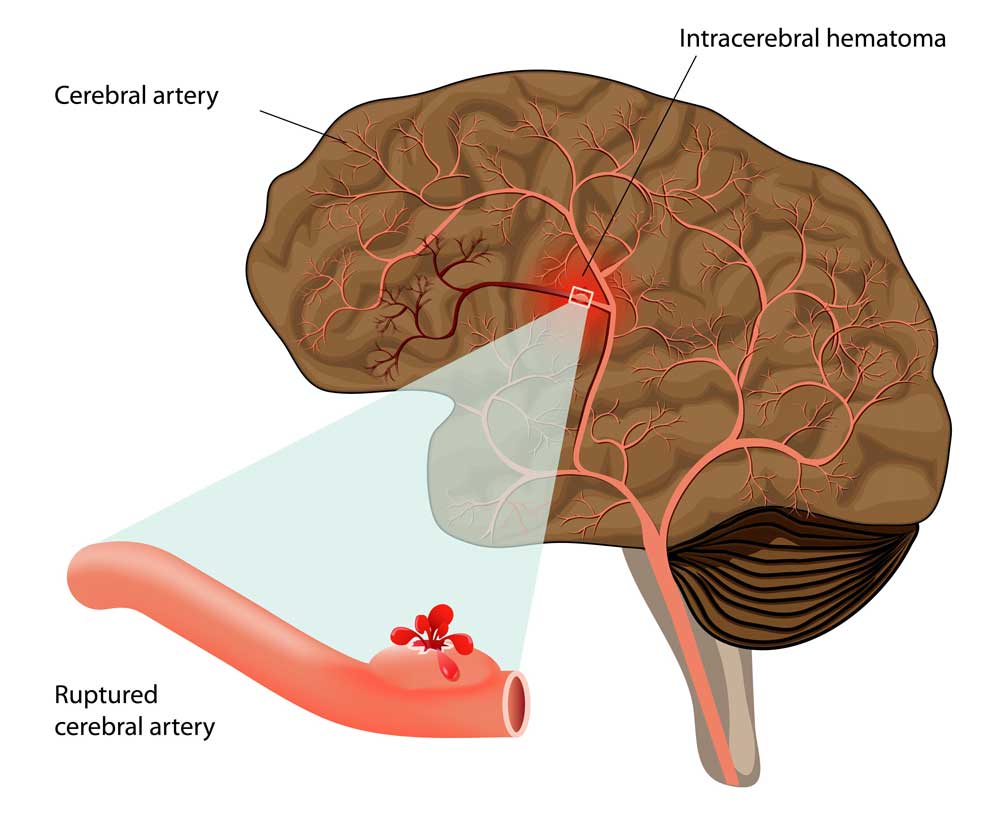 Intracerebral hemorrhage, also known as hemorrhagic stroke, is a serious condition in which bleeding occurs in the brain. It accounts for about 12% of all strokes and can happen to anyone. The brain surgeons at Atlantic NeuroSurgical Specialists (ANS) are highly experienced with treating this condition. Contact one of our New Jersey offices for more information.

What is an Intracerebral Hemorrhage?

When a blood vessel bursts inside the brain, this condition is described as an intracerebral hemorrhage. Commonly occurring in the basal ganglia, cerebellum, brainstem and cortex, blood from the broken vessel leaks into the brain. This collecting blood, along with increased pressure, deprives brain cells of oxygen and can cause damage until corrected. Once cells are damaged, affected individuals may experience loss of functions associated with the area of the brain where those cells are located and, in some cases, unconsciousness or even death.

This condition can be caused by a variety of different triggers. However, it’s typically a result of hypertension, also known as high blood pressure. High blood pressure can be treated to prevent a brain hemorrhage, but unfortunately many people don’t know they have it until after bleeding occurs. The use of some addictive substances can also cause severe hypertension.

What are the Symptoms?

Because intracerebral hemorrhage occurs quickly, it’s important to act right away if its symptoms are observed, especially if you have one or more existing risk factors. Common symptoms include:

How is it Treated?

The first few hours after an intracerebral hemorrhage are critical. If you or someone near you is experiencing these symptoms, call 911 immediately. Doctors need to know when symptoms started and if the hemorrhage was caused by a stroke or something else. Mistreating the hemorrhage as a stroke could cause the bleeding to worsen.

If it’s not treated correctly right away, the patient may have lasting complications, which may include seizures, cognitive impairments and vision loss, among others. Surgical intervention, such as clipping a ruptured cerebral aneurysm or brain decompression, may be necessary, and your doctor may also prescribe medicines to alleviate bleeding and guard against reoccurrence. After intracerebral hemorrhage, lifestyle changes and rehabilitation may be suggested.