Coccydynia, also known as coccyalgia, refers to pain and inflammation of the coccyx (tailbone), the final segment of the spine, located between the buttocks. Patients suffering from coccydynia experience pain on the tailbone that is especially pronounced when sitting or when engaged in any activity that puts pressure on the site. Coccydynia is considerably more common in women than in men and it occurs most commonly in patients who are approximately 40 years of age.

Most frequently, coccydynia is the result of a traumatic injury, such as may occur during a fall or a particularly difficult birthing experience. It may also be caused by repeated stress to the area, such as that which occurs during horseback riding or bicycling. In some cases, the condition may be idiopathic, meaning that it has no known cause. Several medical problems may mimic coccydynia, including pilonidal cysts, sciatica, and shingles. On rare occasions, coccydynia may result from an infection or a tumor. When a patient presents with coccydynia, it is important to rule out other causes of the pain, including a fracture of the coccyx. 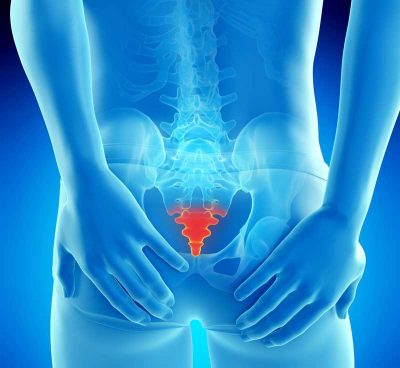 Patients with coccydynia experience more intense pain when involved in any activity that puts increased pressure on the coccyx, including sitting on a hard surface, bicycling or horseback riding. Patients may also experience pain when constipated, straining during a bowel movement or during sexual intercourse.

Coccydynia is usually diagnosed through a simple physical examination. In most cases, however, imaging tests, such as X-rays, or CT or MRI scans, are necessary to rule out other causes of the patient’s complaints.

Coccydynia is normally treated through rest and avoidance of activities that may reinjure the area. Pain medications and anti-inflammatories are often prescribed. to relieve symptoms. Typically, patients are advised to sit on pillows, or on cushions especially designed to provide buttock support. Corticosteroid injections may be administered and are often effective in dramatically lessening discomfort. Sometimes physical therapy is recommended to hasten recovery. In rare instances, when a patient’s pain is persistent and not alleviated by medication, a surgical procedure called a coccygectomy, during which the coccyx is removed, may be performed.