When viewed from the side, the normal cervical spine curves slightly inward. This inward curve is called lordosis. Kyphosis is a term used to describe a type of abnormal curve in the spine. A kyphotic curve looks like the letter “C” with the opening of the C pointing towards the front. This type of curve is the opposite of a normal lordotic curve, which has the opening facing towards the back. The larger the abnormal curve, the more serious the problem. Several different conditions can lead to an excessive kyphosis.

This condition has several possible causes and can develop in both children and adults.

Finding the cause of your neck problem begins with a complete history and physical exam. Various diagnostic tests may be ordered to help your doctor determine exactly what is causing your symptoms. The most common tests used to diagnose cervical kyphosis are X-ray and MRI.

Treatment for cervical kyphosis depends largely on whether there is pressure on the spinal cord. If there is, surgery may be suggested. If the cervical kyphosis is primarily causing pain and concern about your appearance, then the doctor may consider trying to control the pain and deformity with a neck brace for a short period of time, pain medications, and a physical therapy program.

The typical treatment for congenital kyphosis is surgery. Early surgical intervention usually produces the best results and can prevent progression of the curve. The type of surgical procedure will depend on the nature of the abnormality. Conservative treatments do not have much success at correcting this type of kyphosis. When surgery is not done, it is critical that the condition is observed and that close medical follow-up is done, including X-rays and MRI scans. This is to make sure the kyphosis isn’t worsening to the point it causes more serious problems.

Surgery is usually not recommended when the deformity is fixed (inflexible but not worsening) and if there are no problems with the nerves or spinal cord. If a fixed deformity is accompanied by neurological problems from pressure on the spinal cord, the need for surgery is greater. Surgical correction is the most difficult type of treatment for cervical kyphosis.

Surgery to treat cervical kyphosis usually involves spinal fusion combined with segmental instrumentation. This means that some type of metal (titanium) plate or rod is used to hold the spine in the proper alignment to straighten it. Surgery may require two procedures done during the same operation. First, surgery to the front of the spine is done to relieve the pressure on the spinal cord. The second procedure is done through the back to fuse the spine and prevent the kyphosis from returning.

If the kyphosis is due to ankylosing spondylitis (AS), the connection between the cervical and thoracic spine is the problem area. This type of cervical kyphosis is usually a fixed deformity. In AS the discs between each vertebra of the entire spine calcify and fuse the bones of the spine together. If there is a cervical kyphosis after AS fuses the spine, the surgeon may need to do an osteotomy of the fused spine. “Osteo” means bone, and “otomy” means cut. This procedure involves cutting the front of the spinal column so the surgeon can straighten the spine. The spinal cord is not cut-only the bones of the vertebrae in the front of the spinal column. 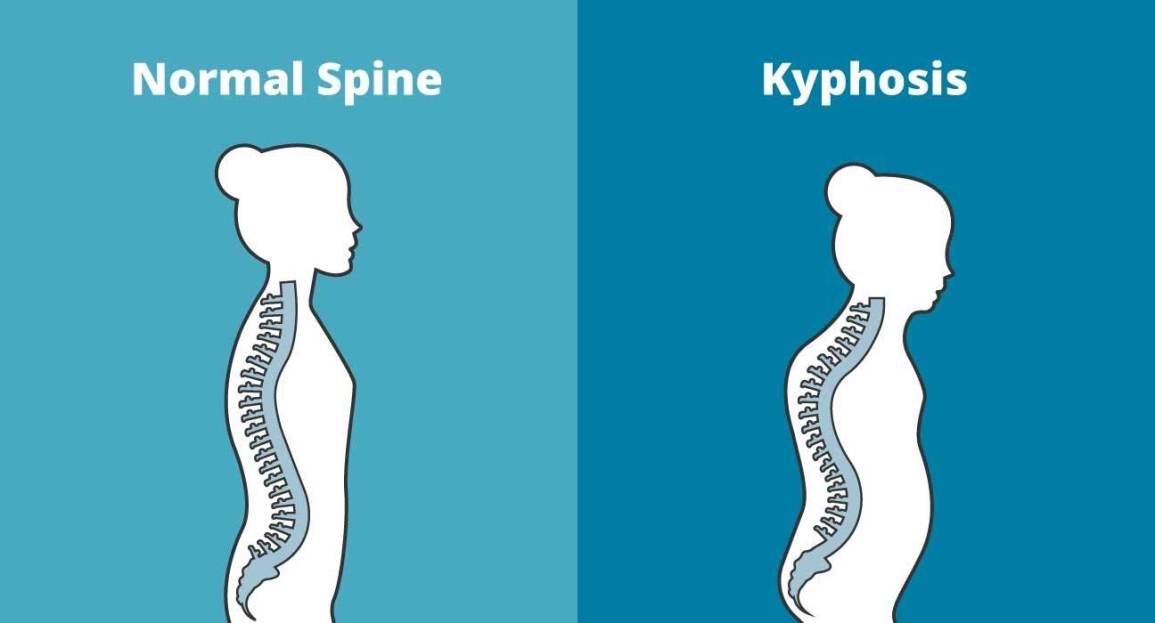