Skip to content
Confronted with a Complex Vascular Malformation, One Patient’s Trust in his Neurosurgeon Paved the Way to Successful Treatment

Confronted with a Complex Vascular Malformation, One Patient’s Trust in his Neurosurgeon Paved the Way to Successful Treatment

At 44, Anthony Schleicher had no real health concerns when he went for his annual physical. He was young, healthy and wasn’t experiencing anything that would indicate otherwise. His doctor, however, observed a vein that was bulging from his head. He recommended Anthony get checked out by a vascular doctor.

“I felt great – no headaches, nothing,” says Anthony, “but after just looking at my vein, the vascular physician knew something was wrong. She ordered an MRI and could instantly see I had a pretty major vascular malformation in my brain. She told me I needed to see a surgeon immediately.”

Anthony’s state was so worrisome that she got him an appointment with Paul Saphier, MD – a neurosurgeon at Altair Health, one of the only doctors she knew who could handle a case as complex as Anthony’s – that same day.

After performing an angiogram, Dr. Saphier confirmed Anthony had a very rare, complex vascular formation called a dural arteriovenous (AV) fistula. This abnormal connection between blood vessels in the brain meant Anthony had a 60 percent chance of hemorrhaging at any point.

“Many vascular surgeons believe these types of lesions cannot be cured. Because of this, they often take a palliative approach to surgery, alleviating the symptoms for a patient but not fully treating the issue,” explains Dr. Saphier. “However, with the right approach, even people like Anthony with severe cases can, in fact, be cured – and through their wrists, at that.”

Dr. Saphier explained to Anthony that a staged, transradial endovascular embolization would be the best course of treatment. This phased, minimally invasive approach entails multiple surgeries – performed through a catheter in Anthony’s wrist – to gradually correct the blood flow and close the fistula.

“It really comes down to flow dynamics,” says Dr. Saphier. “If you adjust everything at the same time and change the blood flow in the brain too abruptly, it can lead to major complications, like strokes, or worse. Staging the process is a much safer approach.”

“I went from feeling fine one minute to being told I needed brain surgery the next,” Anthony recalls. “Dr. Saphier was very straightforward in explaining my situation. He was also realistic about the risks and said it was my decision on whether or not to pursue treatment. I could have hemorrhaged in two days, two years or never hemorrhage at all.”

Not wanting to do anything to jeopardize his ability to be there for his three young children, Anthony decided to move forward with surgery.

“I knew the journey wouldn’t be easy, but I trusted Dr. Saphier. I had complete faith in him,” he says.

Anthony underwent his first embolization around Halloween. Six weeks later, Dr. Saphier was able to close the fistula during a second embolization.

“After the surgeries, there were some lingering effects that lasted a few weeks like headaches and blurry vision, but pretty soon, I felt back to myself,” says Anthony.

While waiting for his follow-up appointment, which is typically scheduled for three to six months after surgery, COVID-19 took hold. Anthony went back to see Dr. Saphier for an angiogram in June. Unfortunately, the fistula had come back. 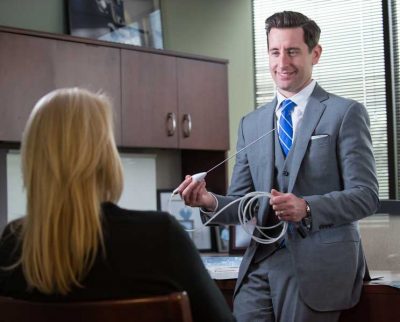 “It’s not uncommon for fistulas to resurface despite success in the operating room. That’s why follow-up scans and monitoring are such an important piece of the puzzle,” says Dr. Saphier.

At this point, Anthony needed to decide if he wanted to undergo another surgery.

“I told Dr. Saphier to do whatever he needed to do to get me the best outcome,” says Anthony. “I had total confidence in him, and that confidence is what’s allowing me to live a normal life today.”

In a subsequent surgery, Dr. Saphier was ultimately able to obliterate the fistula and restore normal blood circulation. Anthony got the all clear at his three-month follow-up appointment and is back to life as usual, keeping up with his children, now 11, 9 and 6.

“My journey – especially during COVID – had its ups and downs, but in the end, it was definitely worth it,” says Anthony. “I’m incredibly fortunate to have had a true expert like Dr. Saphier guide me from start to finish. My family and I will be forever grateful for his care.”