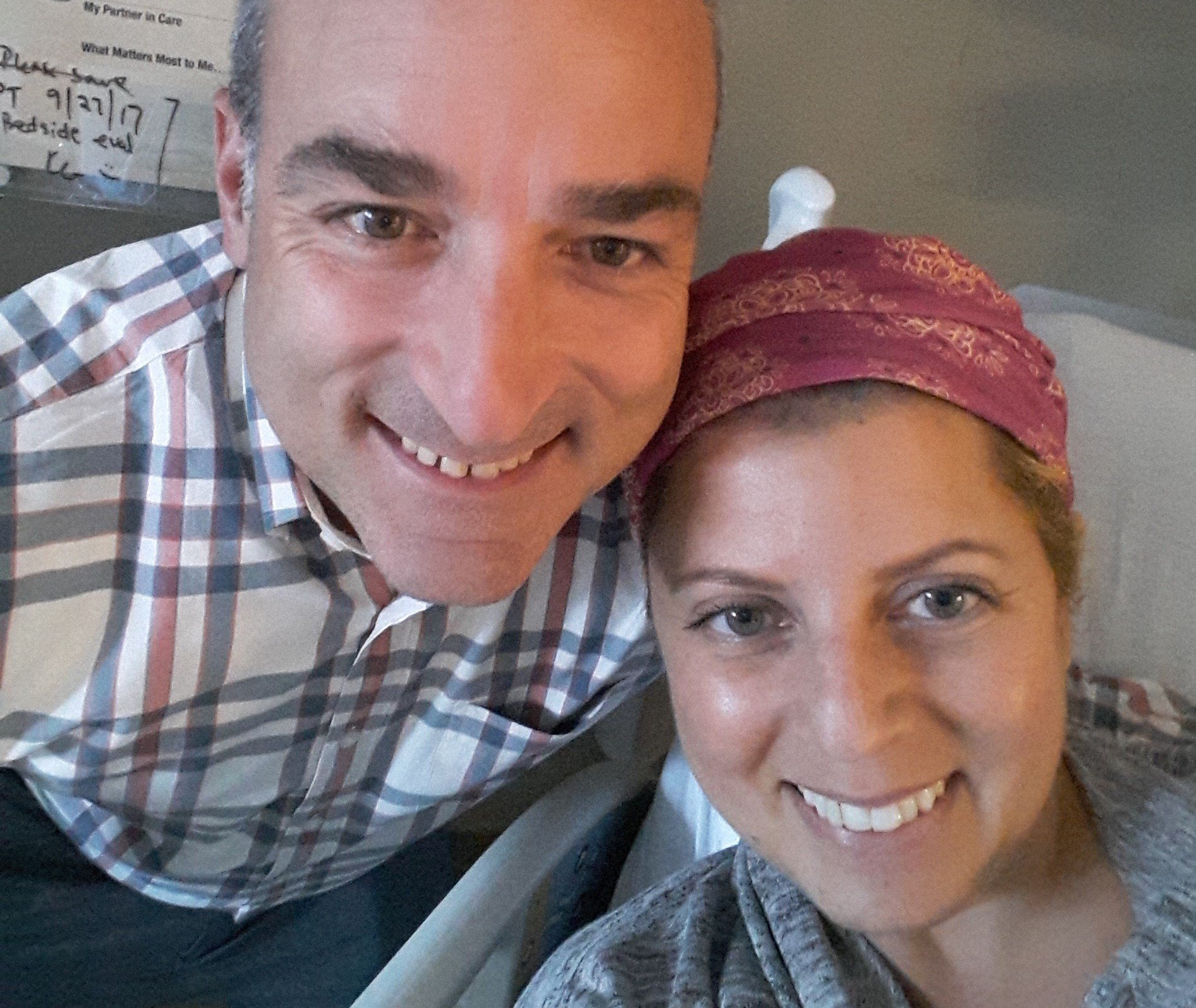 Carrie Mazak and her husband, Joe Senerchia, were thrilled with the news that she was healthy enough to be discharged from Jersey Shore Medical Center only two weeks after suffering a life-threatening ruptured brain aneurysm.

It was 5:40 a.m. when Joe Senerchia heard his wife, Carrie Mazak, reciting her ABCs in the guest bedroom of their Ocean Township, New Jersey home.

“I had heard on a newscast that if you think you’re having a stroke, you may not be able to recite the alphabet,” says Carrie. “I could, but my right leg was numb. I had an awful headache, and it sounded like the room was underwater.”

A few minutes earlier, Carrie was getting out of the shower and flipped her head over to put her wet hair in a towel.

“It felt like an explosion went off in the right side of my head,” she explains.

“Not knowing exactly what had happened, I checked in on Carrie and saw her sitting on the floor, leaning up against the bed,” recalls Joe. “When she told me her right leg was numb, I asked if she thought she was having a stroke. She said she just needed a minute. But less time than that, she was passing out and struggling to breathe, so I called 911 and began administering chest compressions.”

Within 60 seconds, emergency responders took over and transported Carrie to Jersey Shore Medical Center, where a CAT scan revealed blood on her brain.

After administering an angiogram to visualize the blood vessels in her brain, our team of neurosurgeons explained to Carrie and her family that she had a ruptured middle cerebral artery (MCA) aneurysm on the right side of her brain. Carrie would need emergency surgery to stop the bleeding.

“You think this type of thing will never happen to you, and then all of the sudden, you’re getting a crash course in brain aneurysms,” shares Sarah Mazak, one of Carrie’s four sisters who were also by her side at the hospital. “Altair Health went out of their way to include all of us and educate all of us – in a way we could actually understand.”

Brain aneurysms are typically treated with either clipping or coiling. Clipping requires a craniotomy to open the skull and place a small clip across the neck of the aneurysm to prevent blood from entering it. Alternatively, endovascular coiling is a minimally invasive procedure that uses small coils – inserted through a tiny catheter in the blood stream – to promote clotting and block blood flow from entering the aneurysm.

“Minimally invasive doesn’t necessarily mean minimal risk,” explains Dr. Chapple. “Because of the size, shape, and location of Carrie’s aneurysm and her young age, coiling would have likely presented problems and required her to undergo multiple procedures, or worse put her at risk of a large stroke or further hemorrhage. While open surgery to place the permanent clip on the aneurysm carried its own risks, it would take a major risk – blood leaking back into the aneurysm or out onto her brain – off the table and ultimately lead to a better long term recovery. Open surgery also allows you to see all of the blood vessels going into and out of the aneurysm directly, so the chances of causing a stroke are decreased. I was confident it was the best treatment option for Carrie.”

“Putting our trust in Altair Health, we agreed to proceed with the clipping,” recalls Joe. “And while it may seem odd at first to opt for open surgery when other options are available, we’re incredibly grateful that Altair neurosurgeons have the dual training and expertise in both traditional and newer treatments to give us this recommendation. The outcome for Carrie – and for all of us – has been tremendous.”

“Patients like Carrie are the reason we went into Neurosurgery,” says Dr. Chapple. “This aneurysm could have permanently disabled or even killed her, but because she got the right treatment she is going to live a normal life again. It takes many years of training to become a neurosurgeon. Seeing Carrie’s recovery makes it all worth it.”