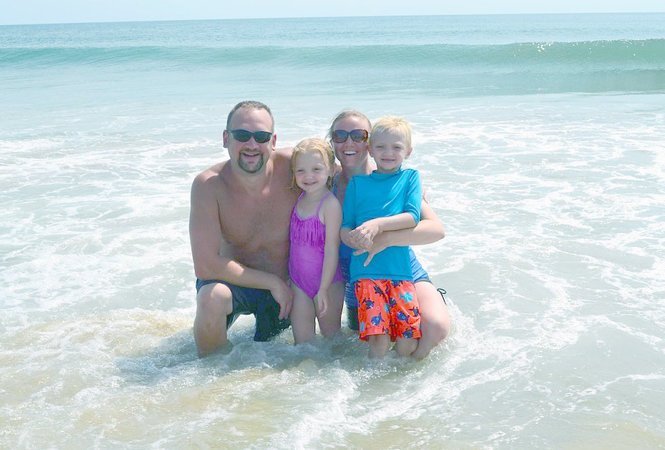 Delacey Thiele, who received emergency neck surgery from Altair Health that preserved her ability to walk, is once again enjoying the beach with, from left, her husband, Eric, and two young children, Jovey and Jace.

Delacey Thiele, a schoolteacher and mother of two, relentlessly sought answers for her mysterious medical symptoms. Now, she is encouraging others to do the same — before it’s too late.

“Engaging with my students is the part of my job at Wantage Elementary School in Wantage, N.J., I love most,” Thiele said. “And being outdoors with my husband, two children and four siblings is very important to me.”

It wasn’t so much fun, though, when her legs started feeling heavy, weak and tired. A round of tests only showed low levels of Vitamin D. Thiele began taking supplements, but a few weeks later, she was feeling even worse.

“Numbness in my legs was hampering my daily routine. A busy working mom, I wasn’t used to being sidelined,” she said. “I became increasingly worried when subsequent extensive bloodwork didn’t reveal conclusive answers.”

Thiele’s symptoms continued to worsen. She had tingling in her fingers and hands as well as pain down her arm. A neurologist told her she could likely have multiple sclerosis; tumors of the brain or spine; or herniated discs. He ordered two MRIs: one of her brain and one of her spine. During the spine MRI, the radiologist noticed findings around her neck. An on-the-spot neck MRI revealed herniated discs at three levels. A herniated disc — often known as a slipped disc or ruptured disc — develops when one of the cushion-like pads between the vertebrae moves out of position and presses on adjacent nerves.

Thiele was immediately referred to Altair Health. When she received a call from Altair the next morning, the spine team had already read her MRI reports and told her to come in immediately. They explained it was urgent to get her into surgery and postponed an existing procedure scheduled for the next morning and admitted her to the hospital to remove the herniated discs.

During the procedure, they performed an anterior cervical discectomy and fusion (ACDF). This is a type of neck surgery that involves removing a damaged disc to relieve spinal cord or nerve root pressure and alleviate corresponding pain, weakness, numbness and tingling. Thankfully, Delacey acted quickly. She came to Altair Health right away, which may have saved her ability to walk. Had she waited another week, it may have been too late to intervene — and she could have become a quadriplegic. She was very lucky.

“I felt immediate relief right after surgery,” Thiele said. “I can’t thank Altair Health enough for their care and concern. They truly saved my life.

Thiele took the rest of the school year off to recuperate. After four months of physical therapy, she now has no physical limitations. With the experience behind her, she reflected on the challenges of the first few weeks of uncertainty.

“I hope everyone who has unusual, hard-to-diagnose symptoms searches until they have answers and a treatment plan,” she said. “While you may have to persist to find the correct solution, your life and health are worth it.”