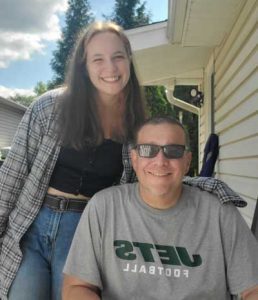 Hearing he is disease-free in the brain brought Ed Battaglia, shown here with his daughter, to tears.

“You are disease-free in the brain.” Hearing these words nearly a year after discovering kidney cancer had spread to his brain brought 56-year-old Edward Battaglia to tears. This triumph was his latest victory in a cancer journey that spans more than a decade.

In 2011, Ed discovered he had prostate cancer. Thankfully, it was caught early, and, with the removal of his prostate, he returned to his normal life. He went years without any signs of the cancer returning, so when the avid softball player’s hip began bothering him in the summer of 2019, he didn’t think much of it.

“I thought I might have pulled a muscle or stretched incorrectly, but by the end of the summer softball season, I was on crutches and eventually couldn’t put any weight on my hip at all. I knew I had to get checked out,” says Ed.

He got an ultrasound at an urgent care, saw an orthopedist and had an X-ray done, but everything came back clear. It wasn’t until he got an MRI scan of his hip that doctors detected a mass in his kidney. A CT scan confirmed Ed had kidney cancer that had spread to the ball and socket joint of his hip. Within a few days, Ed had a hip replacement. After that, he began immunotherapy treatment under the care of Charles M. Farber, MD, PhD, a board-certified, fellowship-trained oncologist, which activated his own immune system to attack the cancerous cells in his body – and had his kidney removed in early 2020. 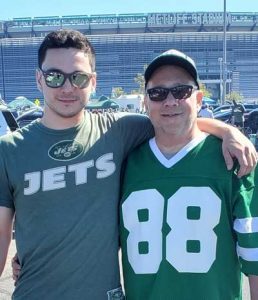 “After I recovered from the surgery, things were good,” Ed recalls. “That summer I was down the shore living life – but one day I lost my balance, fell down and literally couldn’t figure out how to get myself up.”

At the recommendation of Ashley Day, a physician assistant on Dr. Farber’s team, Ed went in right away for an evaluation with his oncology team at Morristown Medical Center and had a full-body MRI. The scan detected two sizable masses in his brain. In 48 hours, he was in the operating room with Dr. Farber’s colleague, board-certified, fellowship- trained neurosurgeon Yaron A. Moshel, MD, PhD, who is co-director of the Gerald J. Glasser Brain Tumor Center.

“The tumors in Ed’s brain were large enough that we needed to remove them as our first order of business,” notes Dr. Moshel. “We typically don’t remove multiple tumors at once, but sometimes that’s the best course of action. Ed’s was one of those situations, so we did a ‘two for one’ brain surgery. In one operation, we completely removed both tumors from different parts of the brain using a minimally invasive technique that reduced potential side effects and recovery time.”

“To give Ed the best chance of being disease-free in the brain, we also treated the brain tumor resection margins with CyberKnife,” adds Joana S. Emmolo, MD, a board-certified radiation oncologist and director of radiation oncology at the Glasser Brain Tumor Center. “This delivers highly targeted stereotactic radiation that eliminates any remaining microscopic cancer cells and helps prevent cancer cells from recurring in those problem areas.”

To stay proactive in controlling the potential recurrence of the disease in the brain, Ed receives follow-up brain scans every four months. To control the cancer elsewhere in his body, Ed is also on an oral chemotherapy and has PET scans every three months.

“I tell everyone that when it comes to my brain cancer, it’s amazing how slowly I got bad, but how quickly I got better,” says Ed. “Aside from feeling the scars from surgery when I wash my hair, it’s like nothing happened. I really want people to know being diagnosed with cancer isn’t a death sentence. Medicine has come so far, and even with cancer, you can live a normal life.”

Committed to living every day the best he can, Ed is attending Mets Fantasy Camp this fall and is planning a trip to Italy with his family next summer. He also believes everything happens for a reason.

“When I chose to be a bone marrow donor 20 years ago and was selected as a match for a 19-year-old girl I didn’t know, I went ahead with the transplant because I truly believe that what comes around, goes around,” he says. “I thought if I do this, if my kids or I needed something down the line, someone else would be there to take care of us. The phenomenal team at Morristown and Overlook medical centers has done that … and so much more.”