Eileen Kelleher, 87, has been a caretaker her entire life. As the oldest daughter in her family, she helped raise her siblings in Ireland after her mother passed away when she was 12. Immigrating to the U.S. by herself at age 19, she worked in the Bronx and sent money back to her family overseas each month. She raised six children of her own, took in her friends’ children when they were struggling postpartum and worked as a home health aide at the Jewish Home and Hospital for the Aged. It was only fitting that she receive outstanding care when she needed it the most. 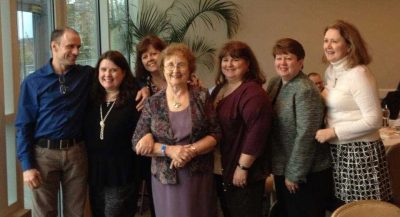 Eileen Kelleher, pictured with her children, survived a major stroke with no permanent damage after undergoing an emergency thrombectomy to remove a blood clot that traveled from her heart into her brain.

“My mom’s stroke literally happened right before my eyes,” says Eileen’s daughter, Margaret Kelleher. “We were at home, having a conversation when she left the room for a moment. She walked back over to my desk, opened her mouth to say something and nothing came out. She was staring straight ahead and started to slump over. I told her she was having a stroke and guided her gently to the floor as I called 911.”

Margaret requested her mother be taken to Jersey Shore University Medical Center, where Eileen had been treated for a transient ischemic attack (TIA) – also called a mini stroke – six years ago and for a dangerous spike in her blood pressure just months earlier.

Before Margaret arrived at the hospital, she received a call from neurosurgeon Maureen Darwal, DO, who had already evaluated Eileen in the emergency room. Eileen was alert but unable to speak or move the right side of her body. She explained Eileen needed emergency surgery to remove a blood clot in her brain, which was causing her stroke.

“Everyone was working so fast,” Margaret recalls. “My mom was in surgery within 90 minutes of the onset of her symptoms at home.”

She credits the speed of care – in addition to the skill of all of the medical personnel and the advancements in medical technology – with enabling her mother to pull through a significant stroke with no permanent damage.

“Time is always critical when it comes to stroke care,” explains Dr. Darwal, a member of the neurosurgical team at Altair Health. “In Eileen’s case, our surgical approach also played a big factor in her health.”

Dr. Darwal determined Eileen was a great candidate for a thrombectomy – a minimally invasive procedure whereby a small catheter is inserted into the femoral artery near the groin and navigated to the blood clot in the brain. The clot is then removed by a retrievable stent.

“Our advanced imaging revealed there was a blockage in a large vessel in Eileen’s brain, but the area of her brain in danger of permanent damage was still receiving some blood flow,” Dr. Darwal continues. “By performing a thrombectomy as quickly as we did, we successfully removed the blockage and saved Eileen from having any lasting damage from her stroke.”

Following the procedure, Eileen stayed in the ICU for 48 hours.

“Dr. Darwal and the team kept us informed every step of the way,” says Margaret. “The neurosurgical, neurology and cardiology teams were very well coordinated when it came to post-surgical care and medication modifications. My mom wasn’t 100%, but she was doing very well.”

Eileen was discharged just three days after surgery. With no evidence of permanent damage in follow-up CT scans, she didn’t require any rehab or even in-home physical therapy. However, she was required to wear a heart monitor to help determine the root cause of her stroke.

Within the first few hours of wearing the monitor, the doctors diagnosed Eileen with atrial fibrillation. This irregular pumping of blood in the various chambers of the heart can lead to a buildup of blood and, consequently, blood clots. This explained the clot that traveled up to Eileen’s brain and began blocking normal blood flow.

Eileen has since had a permanent heart monitor implanted. She is committed to doing everything she can to manage her AFib and avoid another stroke, demonstrating the same grit she has shown in the face of many challenges throughout her life.

“Sadly, my sister, who was also diagnosed with AFib, passed away years ago following a devastating stroke,” Eileen shares. “I’m so grateful to be here today thanks to the outstanding care I received, and I will do anything in my power to take control of my health. After all, my great granddaughter just turned one, and I have many more years of enjoying my family ahead of me.”