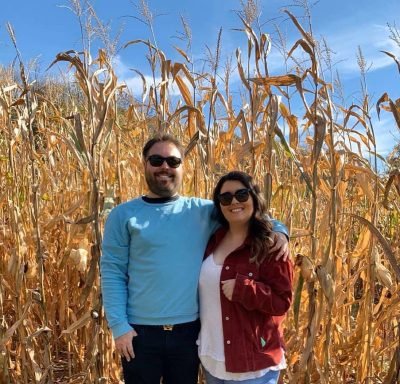 Following two emergency surgeries within two weeks, Emily Poniatowski says she can now start the rest of her life without having to worry.

Instead of applying to law school in the fall of 2018 as she had planned, 24-year-old Emily Poniatowski found herself in the hospital on the verge of not one but two emergency surgeries.

“It all started with a headache I couldn’t get rid of,” Emily recalls. “I got headaches frequently, but they would always go away with over the counter medicine. This one lingered for a week and my vision was also fading in and out. I thought it was a really bad migraine.”

When Emily woke up with double vision, she called her mom to take her to urgent care. They sent her home with a migraine prescription and instructions to try to sleep it off.

“The next morning, my head felt like it was going to explode,” says Emily.

Emily’s mom took her straight to the emergency room. She received IVs of medicine and fluids, but her symptoms didn’t improve. When a CAT scan revealed fluid buildup in her brain, called hydrocephalus, they proceeded with an MRI. That’s when Emily learned there was a rare tumor in her pineal gland, located deep inside the center of the brain, that was blocking the flow of brain and spinal fluid and causing the rest of her brain to inflate. If not treated, the condition would be deadly. She was in shock.

Emily was eventually transported to Overlook Medical Center where she could be treated by the neurosurgical team at the Gerald J. Glasser Brain Tumor Center. There, neurosurgeons determined she needed microsurgery to remove the tumor.

“Emily was a prime candidate for a seated craniotomy, which would allow us to access the center of her brain without damaging healthy issue,” explains Yaron A. Moshel, MD, PhD, a board-certified neurosurgeon at Atlantic NeuroSurgical Specialists (ANS) and co-director of The Gerald J. Glasser Brain Tumor Center. Dr. Moshel is one of a select few surgeons specializing in removing deep-seated brain tumors using technology that includes computer-guided navigation, awake intraoperative brain mapping, endoscopy and microsurgery.

“With this type of procedure, we operate while the patient is in an upright seated position and remove part of the skull,” Dr. Moshel explains. “Particularly important for Emily’s case, this specialized approach allows gravity to naturally open up a critical cleft that separates the brain stem from the cerebellum – a major part of the brain that’s responsible for movement and coordination – providing easier, more direct access to the tumor.”

While Emily was undergoing extensive pre-op evaluations given the unique set of physiological challenges a seated craniotomy presents to the body, she was dealt another blow. A cardiologist discovered she had a congenital heart defect called PFO, or patent foramen ovale, a small opening that lets air pass between the upper two chambers of the heart. Approximately one in four people have PFO, but it doesn’t need to be treated unless there are other heart conditions or complications. With the upright craniotomy, PFO could increase Emily’s risk of having a stroke.

“We absolutely needed to perform brain surgery to save Emily’s life,” says Dr. Moshel. “However, these additional risks affected how and when we did it.”

“We went through an in-depth process – including consulting extensively not only with the experts at ANS and the Atlantic Neuroscience Institute at Overlook Medical Center, but also with leaders at highly regarded university hospitals – to inform our decision to either proceed with the craniotomy, given the urgency of Emily’s situation, or wait to have her heart repaired first. Ultimately, our team along with Emily’s family determined it was in her best interest to undergo heart surgery before neurosurgery,” continues Dr. Moshel.

Two days later, Dr. Robert Kipperman, a cardiologist and thoracic surgeon at Morristown Medical Center, repaired the hole in Emily’s heart with a 45-minute procedure. She recovered at home over the next 10 days before returning to Overlook for her brain surgery.

During that surgery, Dr. Moshel successfully removed all of Emily’s brain tumor. He discovered it was in fact a papillary tumor of the pineal region, of which there have been only about 100 recorded cases. The tumor, thankfully, was benign.

After surgery, Dr. Moshel delivered Emily’s mom the good news, along with a big hug.

“It was tough to come to terms with everything that happened, especially because I’m so young,” says Emily. “But I’m so lucky to have had a surgeon as talented as Dr. Moshel taking care of me. With all of this behind me, I can start the rest of my life without having to worry.”