Skip to content
Epilepsy: 9 Things Doctors Want You to Know

This was first published by Healthgrades. 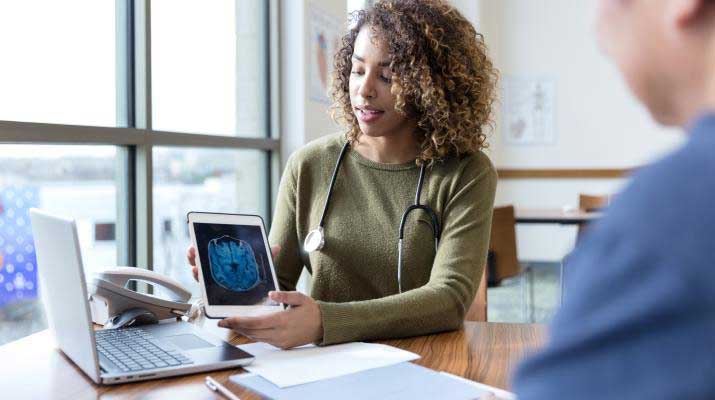 An Often Misunderstood Condition That Can Be Managed

Epilepsy is a condition that occurs due to abnormal electrical activity in the brain, resulting in various types of seizures. In most cases, epilepsy can be managed with medication. However, if the epilepsy doesn’t respond to medications, surgery can be an option. Doctors who treat epilepsy share their expert perspectives on types of seizures, how epilepsy is diagnosed, and effective treatment options to control seizures.

1. “Not all epileptic seizures are the same.”

While many people believe epileptic seizures are all the same, they actually can be more involved than generalized convulsions. “Epileptic seizures have different manifestations, and they affect people in different ways,” says Dr. Ammar Kheder, pediatric neurologist at Children’s Healthcare of Atlanta. “The signs and symptoms are dependent on which part of the brain is affected during the seizure. However, they tend to be stereotyped for each patient. The seizure symptoms and signs are often referred to as the ‘ictal period.’”

2. “Epilepsy diagnosis is a multi-step process.”

For a proper epilepsy diagnosis, the patient will need to undergo evaluation, examinations and testing. “The diagnosis is based on a detailed description of the symptoms and signs of the seizure and physical examination,” Dr. Kheder says. “Additional information is obtained regarding family history and risk factors for seizures. The diagnosis is then confirmed with tests, such as a blood test, electroencephalogram (EEG) and brain scan. EEG measures electrical activity in the brain.”

Typically, epileptic seizures don’t last long. “Most seizures last 30 to 90 seconds, which means most shaking episodes are self-limited,” says Dr. Clifford Segil, neurologist at Providence Saint John’s Health Center in Santa Monica, Calif. “If a person shakes for more than five minutes or has multiple episodes in 30 minutes, 911 should be dialed as this activity is concerning for a dangerous seizure or ‘status epilepticus.’ After a seizure, there may be some time a person is confused while awaiting to return to normal, which is called a ‘post-ictal state.’”

4. “Video recording seizures as they occur is very helpful.”

After seeking emergency help for the person affected, recording a seizure could provide valuable information for the epilepsy doctor. “If someone has an episode concerning a seizure, I wish the episode would be caught on video,” Dr. Segil says. “If a neurologist can see which way someone’s eyes rhythmically jerk at seizure onset, it helps us localize or guess where in the brain there is an irritation causing a seizure.”

5. “There are many medications available to treat epilepsy.”

While some epilepsy medications such as Dilantin may be more well-known than others, there are more than 30 medications used to treat epilepsy. “There are a variety of medications used to treat epilepsy aimed at decreasing neuronal excitation or increasing neuronal inhibition,” says Dr. Kate Labiner, pediatric neurologist at Child Neurology Consultants in Austin, Texas. “Epileptologists pick which medicine may work best for each patient based on the type of seizures they are experiencing, the findings in their EEG and then also the etiology (cause), as certain genetic conditions, for example, are known to respond better to some medications than others.”

6. “Before surgery, invasive monitoring of epilepsy may be required.”

To determine which surgical option may be most effective, patients may first need to be evaluated through invasive procedures. “Prior to many of the surgical options, patients will be advised to undergo phase 2 invasive monitoring of their epilepsy,” says Dr. Ronald Benitez, M.D., chief of endovascular neurosurgery at Atlantic Health System Overlook Medical Center, Center for Epilepsy in Summit, N.J. “This involves either a craniotomy and implantation of grids and strip electrodes or stereo EEG. This allows us to pinpoint the onset of the seizure as well as where the seizure travels to.”

8. “Although epilepsy is manageable, patients still need to beware their possibility of seizures.”

Medication is the most common treatment for epilepsy. There are more than 20 different anti-seizure medications, and although it may take a while to find the medication (or combination of meds) that’s most effective for an individual, most people with epilepsy do well with medication.

If medication doesn’t work, medical devices that stimulate the nervous system may be effective. Another option, for some patients, is brain surgery. If seizures are consistently initiated in a specific part of the brain, physicians may be able to surgically remove that focal area of abnormal activity.

Treatment is always individualized to the patient. Talk to your doctor if your current epilepsy treatment is not effective to discuss additional options.

9. “Depending on the cause, children may outgrow epilepsy.”

It is possible children living with epilepsy may not have the condition their entire lives. “The likelihood of outgrowing epilepsy depends on the [cause],” Dr. Labiner says. “The standard practice is two years seizure-free on medications before we repeat an EEG and see if there has been an improvement that would suggest safely tapering medication. Age also plays a factor. The closer the patient is to adulthood when they have their first seizure, the less likely they are to outgrow epilepsy.”
Admin2022-03-30T11:53:38-04:00