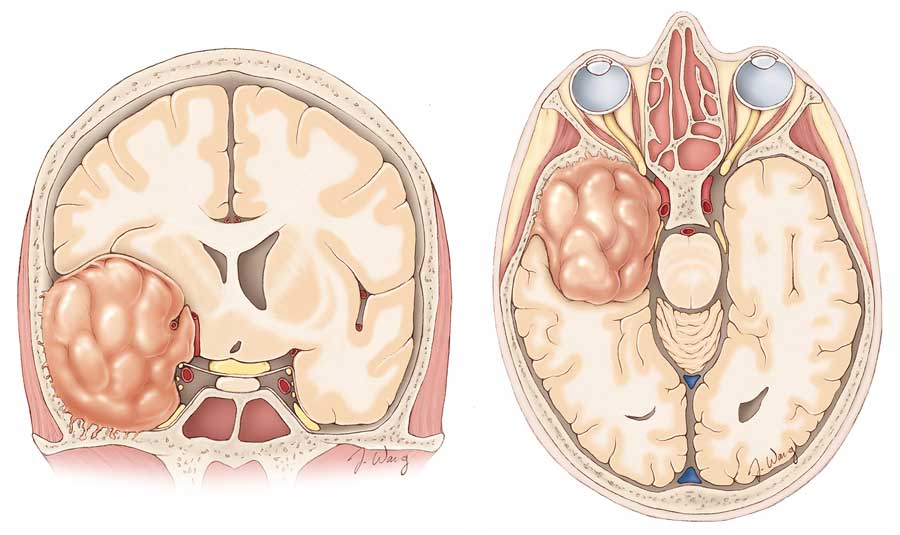 Oligodendrogliomas and oligoastrocytomas (mixed gliomas) are a type of glial cell tumor arising from oligodendrocytes and/or astrocytes. Tumors that arise from glial (from the Greek for “glue”) cells, or supportive tissue, of the brain are called “gliomas.” One type of glioma is the oligodendroglioma, which arise from oligodendrocytes, glial cells that form insulation around neurons, that helps them conduct electrical impulses. Another type of glioma is the astrocytoma, named after astrocytes, the star-shaped glial cells from which they grow.

These tumors are often found in young and middle aged adults and often present with a seizure. Oligodendrogliomas have a characteristic fried egg-shaped cell appearance compared to the star like appearance of astrocytes on microscopic inspection and are considered a unique type of glioma. They often contain areas of calcification and are believed to be slow growing tumors.

Sometimes a glioma may contain a combination of cell types including oligodendroglioma and astrocytic cells. These mixed gliomas are often called oligoastrocytomas and their behavior is usually tends be based more on the grade of the tumor than the individual cell type.

Symptoms, such as headache and nausea, usually are the result of increased intracranial pressure caused by the mass of the tumor in the brain or from a backup of the cerebrospinal fluid that surrounds the brain and spinal cord. As a brain tumor grows, it may interfere with the normal functions of the brain. The glial cells are widely distributed throughout the central nervous system, so these tumors can occur in a wide variety of locations, and therefore can cause a wide variety of other symptoms. Depending on the location, gliomas may cause headaches, nausea, seizures, weakness or numbness in the arms or legs, impairments in language function, blurred vision, changes in personality, cognitive impairments and memory loss. Some oligodendrogliomas and mixed gliomas may reach a fairly large size before they begin to cause noticeable symptoms and oligodendrogliomas are more often associated with the onset of seizures.

These tumors are diagnosed with a neurological examination followed by imaging studies of the brain, usually a computed tomography (CT) or magnetic resonance imaging (MRI) scan. The scan is usually performed with a contrast dye that makes the border and details of the tumor more visible in relation to the surrounding normal brain. The scan provides detail information regarding the exact size, location and probable type of tumor. Many oligodendrogliomas will demonstrate some degree of hardening or calcification on imaging studies. However, only examination of a patient’s tumor tissue under a microscope can confirm an exact diagnosis. This tissue is usually obtained with either a biopsy or removal of the tumor. In some cases, neurosurgeons may employ a stereotactic MRI scan. In this study, a high-resolution contrast MRI is performed and a three-dimensional brain model is constructed using a computer system that is used to perform minimally invasive surgery and allow for volumetric three-dimensional removal of the tumor, which maximizes the degree of tumor removal.

In general, the initial treatment of oligodendrogliomas and oligoastrocytomas (mixed gliomas) is surgical resection of the tumor. With modern techniques, surgery for a craniotomy (making an opening in the skull) is generally safe and allows the team at the Brain Tumor Center to obtain tumor tissue for accurate microscopic diagnosis and treatment planning. With stereotactic volumetric techniques a tumor surgeon can often achieve a gross or near total removal of the tumor when evaluated with an MRI scan after surgery. Removing the tumor tends to reduce the symptoms caused by the presence of the tumor. In some patients with medical conditions that don’t allow for surgery or in patients with concerns about the location of the tumor, a biopsy may be done in place of the surgery.

In some cases, depending on the location of the tumor, the neurosurgeon may employ advanced techniques that enable safe removal of a tumor even in eloquent parts of the brain. Some of these techniques include functional brain mapping to identify the location of movement, sensation and language centers in the brain. This is performed with intraoperative electrical stimulation of the brain, functional MRI scans and occasionally by performing the surgery awake in order to monitor and evaluate these functions during the operation. With stereotactic image-guided techniques the surgeon uses an MRI based 3D model of the patients brain – much like a GPS system – to safely remove as much of the tumor as possible. High-powered microscopes are also used to help the neurosurgeon better see the tumor and ultrasonic aspirators are sometimes used to help remove the tumor.

Recently, the role of chemotherapy as an important treatment for some oligodendrogliomas has been established. Biopsied or resected oligodendrogliomas and oligoastrocytomas (mixed gliomas) are be tested by neuropathologists for 1p and 19q chromosomal deletions because those deletions confer increased sensitivity to some types of chemotherapy. Depending on the extent of tumor resection, the grade of the tumor when evaluated by the pathologist and the presence of chromosomal co-deletions, chemotherapy and/or radiation may be suggested after surgery to prevent any future recurrence or to treat any residual tumor cells. For most low-grade oligodendrogliomas and oligoastrocytomas (mixed gliomas) that on MRI scan appear to have been completely resected with surgery, close observation with serial follow-up MRI scans is often recommended. If there is residual remaining tumor after surgery, radiation treatment is often recommended however the optimal timing of radiation is still being determined and often takes into consideration the status of any chromosomal deletions within the tumor. For anaplastic oligodendrogliomas and oligoastrocytomas (mixed gliomas) a combination of radiation and chemotharpy is often recommended.