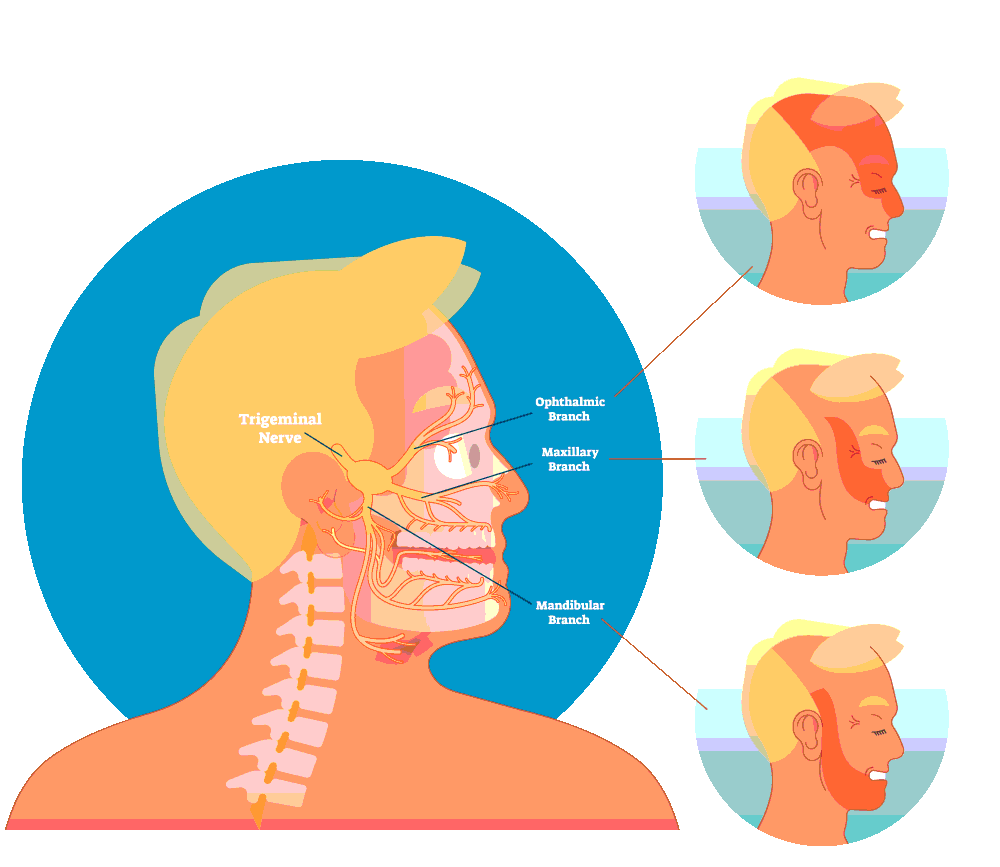 Trigeminal neuralgia (or tic douloureux) is one of the most common treatable craniofacial pain syndromes. Trigeminal neuralgia is a neuropathic syndrome characterized by episodes of severe agonizing facial pain originating from the trigeminal nerve, which supplies sensation to the face and mouth. Although it can happen at any age, it is more commonly seen in people over the age of 50. The trigeminal nerve has three major branches including the ophthalmic nerve (V1), maxillary nerve (V2) and the mandibular nerve (V3). The ophthalmic (V1) division supplies sensation to the eye, forehead and bridge of the nose. The maxillary (V2) division supplies sensory innervation to the upper lip, palate, upper teeth, gums, and the inner cheek below the eye. The mandibular (V3) division provides sensation to the jaw, lower teeth, gums, lower lip, and side of the tongue. The pain from trigeminal neuralgia may involve one, two or all three divisions of the trigeminal nerve, but most commonly involves the middle (Maxillary nerve V2) and lower (mandibular V3) branches.

Trigeminal neuralgia is caused by damage to the outer covering of the trigeminal nerve, which carries sensory information from the face to the brain. Damage to the outer nerve covering (the myelin sheath) leads to erratic and hyperactive transmission of nerve signals. This can lead to attacks of pain caused by the misdirection of signals sub-serving normal painless sensation. This type of damage to the nerve is usually the result of microvascular compression, where a small blood vessel along the surface of the nerve compresses the nerve as it enters the brainstem. Usually the compression is caused by the superior cerebellar artery, but it can also be caused by other arteries and veins surrounding the brainstem. Occasionally, some patients will have a small tumor that compresses the nerve and causes the symptoms of trigeminal neuralgia. A small fraction of patients with trigeminal neuralgia have multiple sclerosis which causes plaques within the nervous system. The cause of trigeminal neuralgia in these patients is the presence of a plaque within the brain along the sensory pathways of the trigeminal nerve. In some other patients the cause for the neuralgia cannot be clearly identified.

The typical (type I) pain from trigeminal neuralgia is classically described as “stabbing,” or “electrical shock-like” in nature. Episodes are typically sudden, brief bursts of facial pain often triggered by light touch around the mouth and face. Sensory stimuli that often trigger the pain can include talking, brushing the teeth, eating, cold or a light breeze may trigger the pain. The pain is usually a sharp electric like pain that can also occur spontaneously without a “trigger”. The symptoms typically occur on one side of the face, but in rare cases may be bilateral. Patients can have periods of remission with pain-free intervals that last for minutes to weeks, but true long-term remission without treatment is rare. The attacks will often cease during sleep but often occur upon arising in the morning.

Some patients develop atypical symptoms in addition to the classic trigeminal neuralgia symptoms. The atypical (type II) symptoms often include a more constant pain that is not triggered by touch and is associated with a more dull or burning sensation. This constellation of very specific symptoms often provides the diagnosis of trigeminal neurlagia.

Trigeminal neuralgia is diagnosed almost exclusively based on history, symptomatology and neurological examination. Your surgeon will ask very specific symptoms regarding your symptoms and medication history to help support the diagnosis and recommend the best treatment option. Imaging studies of the brain, usually a computed tomography (CT) or magnetic resonance imaging (MRI) scan are also usually performed to support the diagnosis. These imaging studies are obtained to exclude the possibility of a small tumor or multiple sclerosis which would dictate a different course of treatment. The scan is usually performed with a contrast dye that makes the border and details of any tumor or abnormality more visible in relation to the surrounding normal brain.

In addition to the standard MRI scan, a special high resolution MRI scan is obtained with very thin slices that can directly visualize the trigeminal nerve and identify the presence of a compressive vessel. However, many people without symptoms of trigeminal neuralgia will also have a vessel near the brainstem; therefore, these imaging findings must be interpreted very carefully with consideration of the patient’s particular symptoms and history including history of prior medical or surgical treatments.

The primary initial treatment of trigeminal neuralgia is usually pharmacological. In some patients, the pain is mild and can subside without any treatment, but in most patients with bothersome pain medical management is recommended. Patients often obtain relief, at least initially, with the anti-convulsant medication carbamazepine (Tegretol®) or oxcarbazepine (Trileptal®). When first diagnosed, these drugs are often highly effective in treating the pain of trigeminal neuralgia. These medications sometimes have side effects, including lethargy, balance difficulties, low sodium, skin rash and bone marrow suppression. If these medications are ineffective or have intolerable side effects, a variety of other medications may be used (e.g. Pregabalin –Lyrica®, Lamotrigine — Lamictal®, Phenytoin – Dilantin® and topiramate — Topomax®); however, these second line medications are often not as effective in relieving the pain of trigeminal neuralgia and are usually given in addition to carbamazepine or oxcarbazepine.

Surgical treatment for trigeminal neuralgia is considered if medical management has been exhausted and is no longer effective or if the side effects of medications are excessive or disabling. Fortunately, several surgical options are available and range from non-invasive radiosurgical procedures, to minimally invasive percutaneous procedures to microsurgical decompression of the nerve.

Stereotactic radiosurgery (CyberKnife or GammaKnife) is a painless non-invasive procedure where highly focused beams of radiation are accurately delivered to a small target within or around the brain. For trigeminal neuralgia, the beams of radiation are targeted to the trigeminal nerve just before it enters the brainstem. The ability to focus the radiation beams allows surgeons to target a specific structure and avoid any significant radiation exposure to the rest of the surrounding brain, skin, or hair. The technique is analogous to shining light with a magnifying glass to a pinpoint target. The pinpoint radiation beam causes a slow forming lesion on the nerve that disrupts the transmission of painful sensory signals to the brain. Stereotactic radiosurgery for treatment of trigeminal neuralgia can be delivered with either a Gamma Knife machine or a CyberKnife machine. With the GammaKnife a special head frame is secured on the patients head and a special high resolution MRI scan is obtained to identify and target the trigeminal nerve. The CyberKnife machine is even less invasive and, instead of a frame, a mesh facemask is contoured to the patient’s head and a highly precise robotic arm delivers the individual radiation beams around the patient’s head.

Stereotactic radiosurgery (CyberKnife or GammaKnife) is performed on an outpatient basis and is a collaboration between the neurosurgeon and the radiation oncologist. The trigeminal nerve is identified on the special high resolution MRI scan during the treatment planning. The treatment itself is painless and usually takes approximately one hour. There is usually no need for any anesthesia and no skin incisions required to perform the procedure. The pain relief with stereotactic radiosurgery generally occurs gradually over the course of 2 – 6 weeks time but may take several months to reach the maximum degree of effectiveness. The results with stereotactic radiosurgery are long lasting and the procedure can be repeated in the case of recurrence if more than six months has passed.

Percutaneous glycerol rhizolysis is a minimally invasive procedure during which a small needle is inserted into the cheek and using x-ray guidance the needle is guided through a small foramen (foramen ovale) at the bottom of the skull where the mandibular division of the trigeminal nerve (V3) exits. The needle is advanced above the foramen into a small pocket at the bottom of the skull called meckel’s cave where the trigeminal ganglion is located. Once the location of the needle is confirmed with contrast dye on x-ray, glycerol is injected into meckel’s cave which bathes the spinal fluid around the nerve. The glycerol achieves the therapeutic effect by disrupting the insulation around the trigeminal nerve fibers and consequently disrupting the transmission of painful sensory signals to the brain. The procedure is performed with light sedation and local anesthesia and most people are able to go home a few hours after the procedure. Pain relief from glycerol rhizolysis is usually immediate and the procedure can be repeated if there is any recurrence of trigeminal neuralgia symptoms. There is often a small degree of facial numbness following the procedure that often subsides or becomes less bothersome after several weeks.

Microvascular decompression is the most definitive and first-choice treatment option for patients that are able to undergo general anesthesia and is the procedure that offers the highest likelihood of long-term pain relief. During a microvascular decompression a small opening is made behind the ear through the mastoid bone and the trigeminal nerve is directly inspected under an operating microscope. Using microsurgical techniques, the surgeon identifies the vessel along the surface of the trigeminal nerve that is causing compression and carefully releases the artery and moves it away from the nerve. The nerve is circumferentially inspected to identify any other compressing blood vessels and sometimes an endoscope is used to provide better visualization in areas that can’t be seen through the microscope. To prevent the artery from compressing the nerve again in the future, the surgeon places a soft Teflon cushion along the nerve, between the nerve and the artery, that is left in place.

During a microvascular decompression we usually monitor the functions of other nearby nerves to make sure they are not interfered with; including the nerves for hearing which are right next to the trigeminal nerve. The procedure is also performed with stereotactic image guidance which allows the surgeon to plan out the smallest possible opening into the skull with a GPS type navigation device using a high resolution MRI scan. Patients usually are admitted to the hospital for two days after surgery for observation before being sent home. Patients then return to the office one week after surgery and can resume most normal activities after the office visit. Most patients will have immediate pain relief after surgery and remain with substantially reduced or absent facial pain for years afterwards.