Skip to content
Glioblastoma: Is One of Our Current Clinical Trials Right for You?

Is One of Our Current Clinical Trials Right for You?

A glioblastoma is the highest grade, most malignant form of a glioma. At the Gerald J. Glasser Brain Tumor Center, two clinical trials to evaluate the potential role of immunotherapy – specifically immune checkpoint inhibitors – in patients with glioblastoma are currently underway.

Cancer cells often evade the body’s natural defenses by, in part, making themselves invisible to the immune system. They make proteins that prevent the body’s immune system from recognizing them as invaders that need to be destroyed. 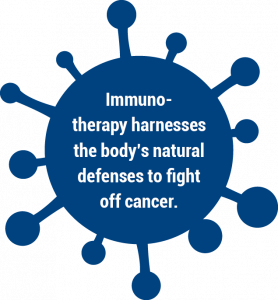 Different types of immune therapies – some actively being implemented and others under investigation – stimulate the body to recognize cancer and fight it off in different ways. Some augment the immune system’s ability to inhibit or stop cancer growth. Others ignite the production of substances made in the body or in a laboratory to destroy cancer cells. These include synthetically engineered monoclonal antibodies such as immune checkpoint inhibitors, oncolytic virus therapy, T-cell therapy and cancer vaccines.

Monoclonal antibodies are chemically designed to latch onto unique receptors on the surface of cancer cells in the same way the body normally fights infection. Checkpoint inhibitors unmask the cancer cells, allowing the immune system to recognize them and empowering the body to boost its capacity to destroy them. Common checkpoint inhibitor medications include Yervoy®, OPDIVO®, Keytruda®, Tecentriq®, Bavencio® and Imfinzi®. These immunotherapy treatments can be used alone or in combination with other cancer treatments.

One clinical trial currently underway at Glasser is examining the combination of radiation with Yervoy and OPDIVO – two immune checkpoint inhibitors – in patients with newly diagnosed glioblastoma that are MGMT unmethylated. These tumors have a molecular profile that makes them less likely to respond to standard chemotherapy.

A second clinical trial is for patients with recurrent, hypermutated glioblastoma who have failed at least one prior therapy. Hypermutated tumors contain a high number of gene errors and appear more prone to respond to immunotherapy.