Skip to content
GPS for the skull: Two NJ neurological centers at forefront of epilepsy care

GPS for the skull: Two NJ neurological centers at forefront of epilepsy care 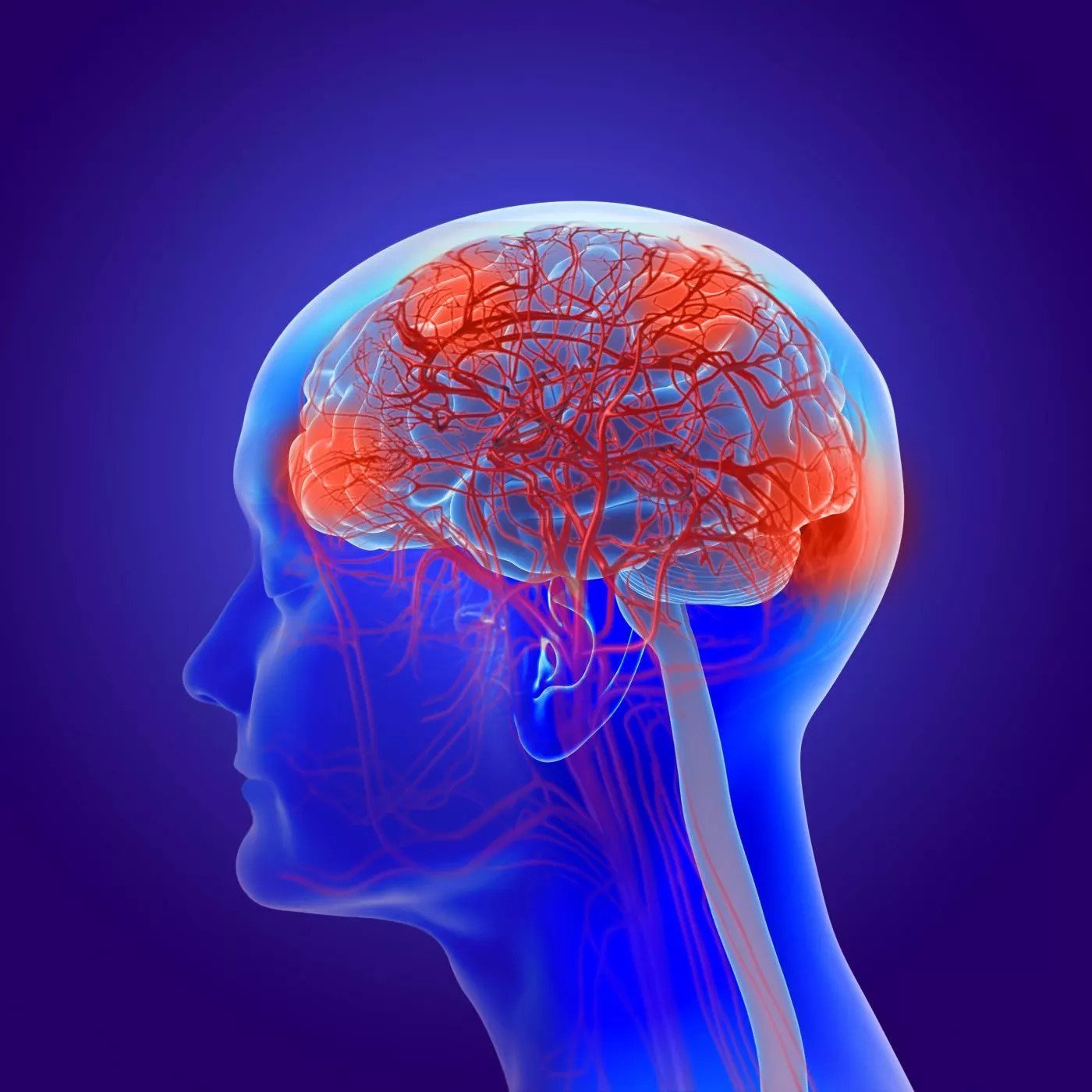 It’s all about precision.

The root cause of epilepsy is located deep inside the brain. To understand the cause and origin of seizures, doctors have, in the past, had to perform major surgery — essentially removing a large piece of a person’s skull to peer inside.

Now, there is a better option.

The ROSA® Brain robot essentially acts as a kind of GPS for the skull, guiding surgeons to precisely insert electrodes into the brain. These electrodes then provide critical information used to plan effective treatment and surgical interventions.

Part of a broader trend toward robotic and minimally invasive surgery, this surgical navigation and positioning system allows for precise positioning and orientation of surgical instruments and tools.

And, it is having a profound impact on the lives of people who suffer from epilepsy and other diseases.

“There’s a transformation underway in epileptic surgery and management,’’ said Dr. Ronald Benitez, chief, endovascular neurosurgery, Overlook Medical Center and a board-certified neurosurgeon with Atlantic NeuroSurgical Specialists. “The robot is a tool that allows us to identify the source of seizures with pinpoint accuracy.’’ 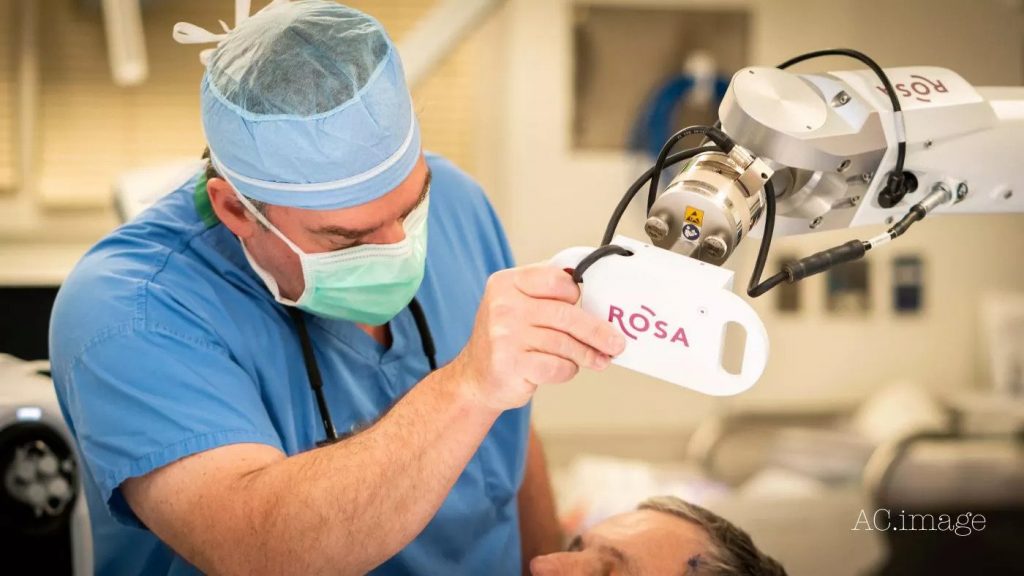 ROSA, which stands for Robotic Stereotactic Assistance, helps surgeons precisely insert tiny electrodes into the brain to gather data that can lead to more effective treatment decisions – without opening the skull or even shaving a patient’s head.

This is a dramatic departure from traditional procedures in which a craniotomy was performed. This procedure involves surgically removing part of the bone from the skull to expose the brain.

“Surgeons then lay grids and strips, essentially electrodes, on the surface of the brain to record the seizure activity as close to the source of origin as we were able to get,’’ Dr. Benitez explained.

The risks of this surgery and the long recovery time, however, often outweighed the benefits, reducing the number of patients who could undergo the surgery.

Now, with the help of the ROSA, which stands for Robotic Stereotactic Assistance, surgeons can precisely insert tiny electrodes into the brain to gather data that can lead to more effective treatment decisions – without opening the skull or even shaving a patient’s head.

The device assists surgeons with a wide variety of medical indications and surgical interventions, such as biopsies, electrode implantation, open skull surgical procedures that require a navigation device and other procedures.

This groundbreaking technology is the latest advancement available to patients at Overlook Medical Center’s Level 4 Epilepsy Center, placing Overlook at the forefront of epilepsy care in New Jersey.

Due to the complexity of epilepsy surgery, only the most technically skilled neurosurgeons are trained to use the ROSA Brain robot. In July, Dr. Benitez performed the first surgery of its kind in New Jersey.

“We inserted 12 electrodes into the patient for seizure monitoring,’’ said Dr. Benitez. “The patient tolerated it really well and basically took no pain medicine. We collected a lot of good data from the monitoring and now have a couple of surgical options that are being considered.’’

The origins of ROSA Brain robot stretch to Europe where physicians inserted soft, tiny electrodes, the size of the lead in a mechanical pencil, into the brain to determine the source of the seizures, Dr. Benitez said.

“Rather than doing a large cranial incision, they would put in a multitude of electrodes, through small incisions,” he said. “This was a big change. They went from making a large incision to making little tiny incisions.’’

But guiding those electrodes into the precise locations was challenging. Enter ROSA Brain robot.

“The robot automates most of that to keep you on the same trajectory,’’ Dr. Benitez explained. 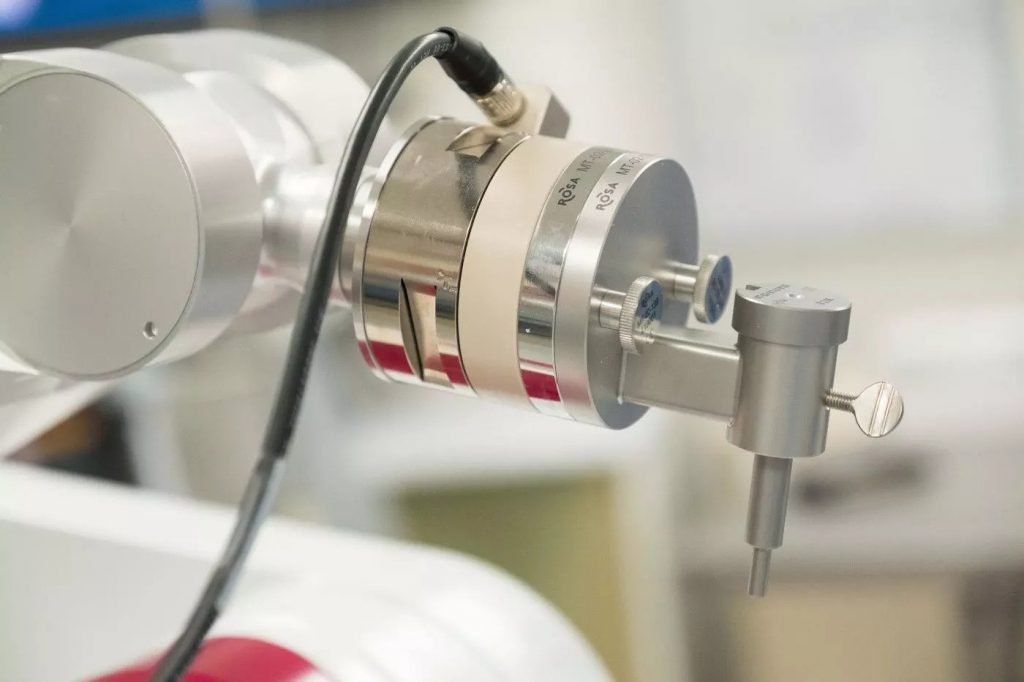 ROSA is being used in more than 150 hospitals worldwide and has been used to perform 9,000 procedures to date, according to the company’s website.

The patient benefits are revolutionary. In addition to reduced morbidity, patients experience less pain, less risk of bleeding and infection and speedier recovery.

“Overall, this procedure is just tolerated much better by the patients,’’ Dr. Benitez said. “Patients don’t have a big incision. There is less pain, less bleeding and less risk of infection.”

For surgeons, the technology provides key information that is critical in delivering effective treatment for the complex disease of epilepsy. In addition to providing 3D imaging of brain wave electrical activity, it also allows surgeons to sample larger areas of the brain with minimal risks.

“We are able to increase the areas of brain we are able to sample, while lowering morbidity,’’ Dr. Benitez said.

This is especially good news for the roughly 30 percent of epilepsy patients who suffer from regular seizures and who do not respond to medication.

“We are talking about patients who are still seizing even though they are taking multiple medications,’’ Dr. Benitez said. “This is a process. It’s part of an overall comprehensive treatment plan.’’

While the ROSA Brain Robot is used primarily as a tool to collect large stores of data to guide treatment decisions, it can also be used in a procedure known as “responsive neurostimulation.’’

“Up to two electrodes are placed into brain, using these robots, that are essentially like a pacemaker in the brain to stimulate activity,’’ Dr. Benitez explained.

The robot can also be used to perform biopsies on deep-seated legions in the brain.

“We use the technology to place a needle in the legion and take a sample of the tissue,’’ Dr. Benitez said. “We then send that sample to the pathologist for diagnosis.’’

Created by device manufacturer Zimmer Biomet, ROSA Brain robots have been approved by the FDA and have been adopted by surgical teams worldwide. ROSA is being used in more than 150 hospitals worldwide and has been used to perform 9,000 procedures to date, according to the company’s website.

The technology has been the subject of about 40 scientific publications detailing and acknowledging the clinical advantages of its use, while healthcare facilities have reported additional benefits, such as saving time, reducing cost and increasing performance, according to Zimmer Biomet.

“This advanced technology opens the window for us to be able to more effectively treat many more patients, with a fraction of the risk,’’ Dr. Benitez said. “It is truly ground-breaking.’’

For more on Dr. Benitez and his use of this cutting-edge technology, click here.