Despite the high mortality rate from stroke, some patients — such as Janis Blackburn — return to normal activities.

According to the American Heart Association and the American Stroke Association, stroke claims a life every four minutes in the United States, someone suffers a stroke once every 40 seconds and stroke accounts for one of every 20 deaths. 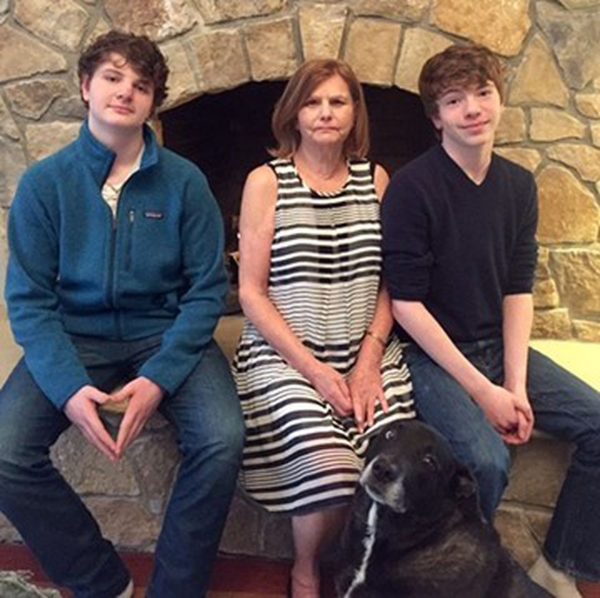 Following a massive stroke and an emergency cerebral angiogram, Janis Blackburn is back to enjoying life with her twin 15-year-old grandsons, Jonathan, left, and Michael

Despite these sobering statistics, there are success stories — such as that of Janis Blackburn of Annandale, Hunterdon County. A 75-year-old retiree who works part time at a department store, Blackburn was recovering from a hip fracture. Able to walk with a cane, her goal was to walk throughout her house several times a day.

One day, she walked into the kitchen and fell onto the island, grabbing the counter. Her body went limp, and she couldn’t move. She called her son-in-law, John, and asked him to call an ambulance. Luckily, a neighbor who serves on the volunteer rescue squad heard the call and came running over. She put ice on Janis’ neck and stayed until the ambulance arrived.

“In the ambulance, I started to feel a little better,” Blackburn said. “They took my vitals, and everything seemed fine. The doctors at the hospital said I had vertigo and left me to rest. A few minutes went by, and the room began to spin. I pressed the help button repeatedly and started screaming ‘Help me. Help me.’ When the nurse arrived, I could no longer talk. As they rushed me down the hall, all I could think was ‘I am dying, I am dying.’ “

That was the last thing Blackburn remembers. When she awoke, with her daughter, Stacey, by her side, Blackburn learned that she had been transferred by helicopter to Overlook Medical Center within an hour of deteriorating in the emergency room at her local facility. She arrived at Overlook in a coma and on a breathing machine. Immediately, a blood clot in her brain that had caused a massive stroke was emergently removed by Dr. Paul Saphier, a board-certified neurosurgeon at Atlantic NeuroSurgical Specialists (ANS) who specializes in endovascular neurosurgery.

“Janis was rushed to the interventional neuroradiology suite for an emergency cerebral angiogram,” Dr. Saphier said. “This procedure, similar to cardiac catheterization but for the brain, involves carefully guiding a thin, long catheter through the blood vessels of the body into the blood vessels of the brain. Once there, we discovered Janis was suffering a stroke from a blockage in one of the most important blood vessels called the basilar artery. This condition has a reported 99 percent chance of death.”

Using very thin wires, catheters and a special device called a “stent triever,” the blood clot was removed in a matter of minutes, and complete blood flow was restored to her brain. Over the next few minutes and hours, Janis’s condition slowly improved from out of a coma to slight wiggling of her feet. By the next morning, she was wide awake and completely normal. Within a few days, Blackburn returned to her pre-stroke self. The only way she knew she suffered a stroke was from the stories her family told her.

“My daughter told me I had a very good doctor. And Dr. Saphier said I am one lucky lady. Ninety-nine percent of people who get this do not survive,” Blackburn said. “Today, my mind is as sharp as it was before, and I’m walking without my cane. I am so thankful to be alive and have more time with my daughter, son-in-law, and twin 15-year-old grandsons. I’m even returning to work soon. Dr. Saphier saved my life.”