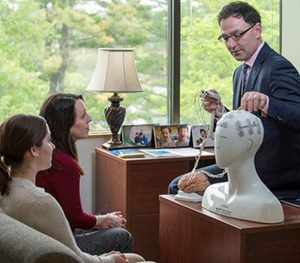 According to Dr. Yaron Moshel, a neurosurgeon at Altair Health and co-director of the Brain Tumor Center of New Jersey, the second phase of this trial sponsored by Tocagen Inc. follows on the heels of a successful first phase. The study compares immunotherapy that uses a retrovirus designed to selectively infect and kill proliferating cancer cells and stimulate a patient’s own immune system to attack recurring high-grade gliomas – glioblastoma and anaplastic astrocytoma — to the current standard of care.

“Chemotherapy and other traditional therapies have had only limited success in treating these most common and aggressive forms of brain cancer,” Dr. Moshel said. “Phase 1 of the Toca 5 trial showed complete and partial tumor shrinkage and extended survival in patients as compared to other standard therapies.”

“The Phase 1 results of this promising immunotherapy reported a 40 percent probability of survival at two years for patients with recurrent glioblastoma,” Dr. Moshel said. “It’s been very hard to get these kinds of results with such an aggressive and challenging type of tumor, so we are really excited by what we are seeing.”

These clinical trial participants followed a therapeutic regimen that involves two discrete steps combining injection of Toca 511 into the tumor cavity during surgery and orally administered courses of Toca FC after surgery. Toca 511 is a retrovirus that selectively infects proliferating cancer cells and reprograms tumor cells with a chemotherapy-activating gene. Toca FC, which is given after surgery, is an extended-release precursor-drug that only gets converted to the active chemotherapy drug within infected tumor cells that have the encoded gene. Within the tumor micro-environment, the regimen selectively kills cancer cells and activates the immune system against cancer while leaving healthy cells unharmed.

Altair Health is now recruiting patients with recurrent glioblastomas or anaplastic astrocytoma for Phase 2 of the trial. A patient may qualify for this study if he/she:

“Immunotherapy and retroviral delivery of gene therapy holds great promise in opening the door to new treatment options for patients suffering from this devastating disease,” Dr. Moshel said. “Our dedicated brain tumor team at Altair Health – and our colleagues worldwide – are encouraged by this innovative approach and the promise it holds for what has been a challenging battle with limited options for treating these kinds of tumors.”