Skip to content
How Do Athletes Approach Spine Care? Ask This Cyclist and CEO.

How Do Athletes Approach Spine Care? Ask This Cyclist and CEO. 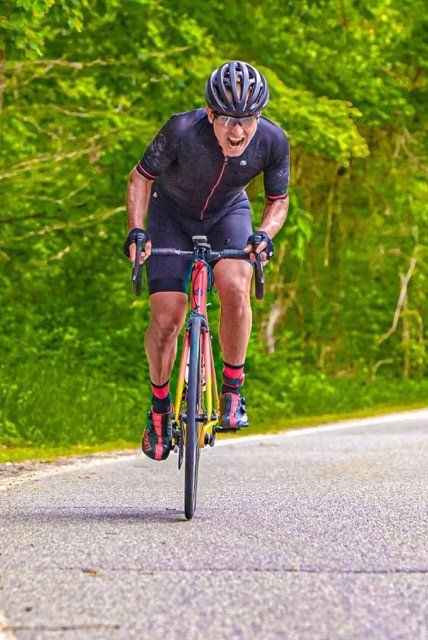 Cyclist and CEO Jason Desalvo finished 12th in his age group at the Highlands Grand Fondo, a 100-mile bike race, less than a year after undergoing surgery for a severely herniated disc in his cervical spine.

Jason Desalvo, CEO of Clear Mountain Partners and Strategic Outpatient Services – and a serious cyclist – knew something was wrong when he woke up with what he calls the worst stiff neck of his life. Jason, 51, participated in bike races since he was in his 20s and was accustomed to a busy, active lifestyle both on the bike and off. That all came to a screeching halt when his neck pain intensified and began radiating down his right arm.

With a background in medical practice management, Jason knew he was experiencing nerve pain. When the pain became unbearable, he headed to the ER at Morristown Medical Center. An MRI two days later revealed a severely herniated disc in his cervical spine, toward the base of his neck.

“After consulting with several neurosurgeons, I took a shot at physical therapy,” Jason shares. “However, instead of getting better, I got worse and started losing the use of my right leg. Just like that, I went from being someone who exercised nearly every day to someone who could barely walk. It was pretty scary.”

Needing to look for the next treatment option, Jason reconnected with Dr. Scott A. Meyer, a board-certified neurosurgeon and spine specialist at Altair Health.

“I did more than my fair share of due diligence in researching neurosurgeons,” Jason notes. “Dr. Meyers’ credentials were impressive. Serving as president of the New Jersey Neurosurgical Society shows he’s at the top of his game. But beyond that, what really spoke to me was the fact that as an athlete himself who plays hockey and practices pilates, Dr. Meyer understood I wasn’t just looking to relieve my pain. I wanted to be back in peak physical condition.”

“After consulting with Jason, I didn’t want to rush into the operating room,” explains Dr. Meyer. “What many people don’t realize is that neurosurgical care doesn’t necessarily mean surgery. Jason could have been one of the 70-80 percent of patients with herniated discs who can rehabilitate with physical therapy alone. When we discovered this wasn’t a viable option for him, we sat down together to ensure he fully understood his treatment options and what each entailed.”

Together, they decided to move forward with cervical disc replacement. During the procedure, Dr. Meyer removed Jason’s damaged cervical disc and replaced it with a Mobi-C Artificial Cervical Disc so Jason could regain the range of motion he desired as a competitive athlete.

“I went from being in excruciating pain and barely able to walk to feeling virtually pain-free and walking normally immediately after surgery,” shares Jason. “Obviously I had to build myself back up physically. Starting the day after the procedure, I began walking every day and within two weeks I was walking an hour a day and working out on the elliptical. In three short months, I was back on my bicycle.”

Three months after that, Jason competed in the Highlands Grand Fondo, a 100-mile bike race with 7,800 vertical feet of climbing. He finished 12th in his age group and 27th out of more than 160 riders.

“If I didn’t know any better, I wouldn’t even know I had surgery,” adds Jason. “Thanks to Dr. Meyer, I’m right back where I wanted to be.”