Dr. Yaron Moshel of Atlantic NeuroSurgical Specialists successfully removed a malignant tumor from a 23-year-old’s brain stem —  despite the odds. Now, John Esmeraldino is on a mission to inspire us all.

Today, John Esmeraldino of Wharton is living the life of a vibrant 24-year-old professional — thanks to the rarely done, highly dangerous brain surgery performed by Dr. Yaron A. Moshel, M.D., Ph.D., co-director of the Gerald J. Glasser Brain Tumor Center.

“During the six-hour surgery, we removed a malignant tumor — an ependymoma — inside John’s brain stem,” Dr. Moshel said. “The brain stem controls the flow of messages between the brain and the rest of the body as well as basic body functions, including breathing, swallowing, heart rate, blood pressure and consciousness. That’s what makes performing surgery there high risk and something most doctors shy away from. Despite the odds of not surviving the procedure, paralysis and other severe neurological issues, John insisted on having it … and I knew it was the right thing to do for him.” 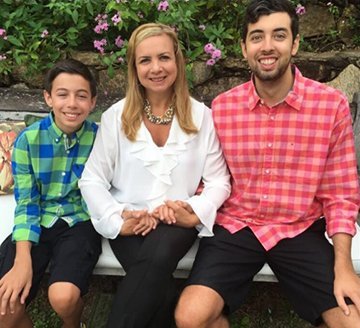 Today, John Esmeraldino, right, is an inspiration to others with support from his mother, Sandra, and brother, Steven.

“I was a healthy 21-year-old attending my junior year at Seton Hall University when I experienced headaches and neck pain for six straight days,” said John, who is a first-generation American and first-generation college student. “I knew something wasn’t right, so I drove myself to the emergency room and was then admitted to the intensive care unit at Overlook Medical Center in Summit.”

“John presented with hydrocephalus — excessive accumulation of fluid in the brain,” Dr. Moshel said. “Normally, we would insert a shunt to drain the fluid. However, to avoid implanting a medical device, we instead entered John’s brain with a tiny camera and created a hole in the bottom of his brain so the fluid could drain naturally.”

A CT scan revealed what appeared to be a benign tumor that was causing the fluid buildup. Since the fluid was draining — and surgery to the brain stem is high risk — Dr. Moshel opted to watch the tumor. A year later, an MRI revealed aggressive growth. Despite the inherent risk, the most proactive approach was removing the tumor so it could be analyzed and treated.

“Knowing how dangerous the surgery is and the potential problems it could cause, I wasn’t eager to do it,” Dr. Moshel said. “But John was insistent. A young man of great faith, John believed the surgery would be a success and he would survive without complication.”

John was right. The surgery, which involved navigating through the deep corridors of the brain toward the brain stem, went flawlessly. The pathology report revealed the tumor was malignant, so John embarked on 27 sessions of radiation.

“Counter to what one would think, radiation was an inspiring experience,” John shared. “The same people were there at 8:30 every morning. When I first started treatments, I noticed no one liked to speak about the unspoken. Although our stories were all different, we were all fighting the same evil enemy.  So I took the initiative to turn that time into a support session, a safe haven for all of us to share how we felt and talk about whatever we wanted. My goal was to bring positivity into everyone’s lives no matter what was happening to them … to make them smile, laugh and push aside the doubts in their minds.”

That was the start of John’s mission to share his journey and help others. They talked about their health, their challenges, loved ones, vacations, each other … whatever they wanted. It was a forum for encouragement and compassion.

John later went on to speak at a cancer survivors’ celebration at Overlook. In front of 180 survivors and loved ones, he shared his journey, his positive outlook on life and strong belief in faith.

“What I’ve learned through this experience is that faith is everything,” John said encouragingly. “As human beings, we get scared when we lose control over something. Let me tell you, we can only control so much. We have to keep a proper balance of mental and physical health, but there’s also our spiritual health. If you’re not going to have faith and believe that you’re going to be OK, why are you even showing up for treatment? You see, we went to war with cancer. It takes a toll on you physically, mentally and emotionally, but you cannot go to war with a loser’s mentality. If you have faith, have faith that everything is going to be OK …”

Today, John is looking to continue sharing and inspiring others. “And, an inspiration he is,” Dr. Moshel said. “People often rise up in the face of challenge, and patients like John are what give us the strength to take on these risks and fight these tumors.”