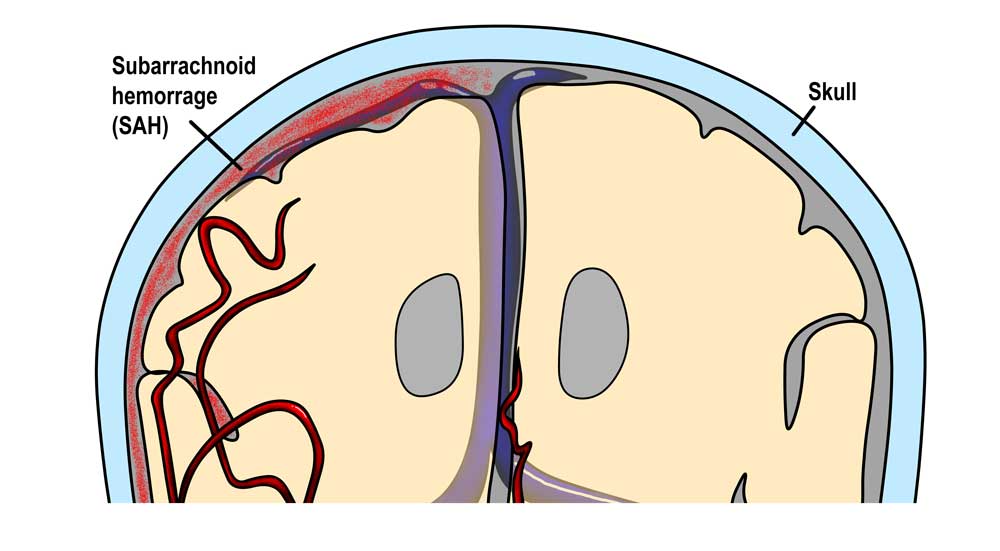 Subarachnoid hemorrhage (SAH) is a serious, life-threatening type of stroke caused by bleeding into the space surrounding the brain. A stroke occurs when the brain is deprived of oxygen because of an interruption of its blood supply. SAH can be caused by a ruptured aneurysm. One-third of patients who suffer an SAH will survive with good recovery; one-third will survive with a disability; and one-third will die. Treatment focuses on stopping the bleeding, restoring normal blood flow, relieving the pressure on the brain, and preventing vasospasm.

What is a subarachnoid hemorrhage?

The subarachnoid space is the area between the brain and the skull. It is normally filled with cerebrospinal fluid (CSF), which acts as a floating cushion to protect the brain.

When blood is released into the subarachnoid space, it irritates the lining of the brain, increases pressure on the brain, and damages brain cells. At the same time, the area of brain that previously received oxygen-rich blood from the affected artery is now deprived of blood, resulting in a stroke. SAH is frequently a sign of a ruptured aneurysm.

Clotted blood and fluid buildup in the subarachnoid space increase pressure on the brain, which is enclosed within the rigid skull. Increased pressure can crush the brain against the bone or cause it to shift and herniate. Blockage of the normal CSF circulation can cause enlargement of the ventricles, or hydrocephalus, causing confusion, lethargy, and loss of consciousness.

If you or a loved one experiences symptoms of an SAH, call 911 immediately.