Skip to content
Operating at the Intersection of Medicine and Ministry

Operating at the Intersection of
Medicine and Ministry 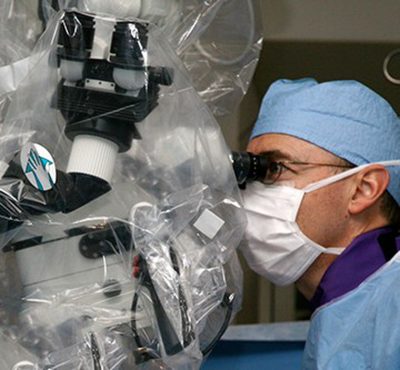 When Dr. Brian D. Beyerl, MD, FACS, a neurosurgeon with Altair Health, achieved his certification from the American Board of Neurological Surgery in 1990, he knew his training wasn’t complete. He had already completed his post-graduate surgery training at Johns Hopkins Hospital and his neurosurgical residency at Massachusetts General Hospital, Harvard Medical School.

However, his next round of education would happen in what many would consider an unlikely place: the Church of the Assumption of the Blessed Virgin Mary in Morristown. After five years of instruction with the Catholic Church, Dr. Beyerl gained another title: deacon. Today, he is as committed to serving his Morristown and Paterson neighbors outside the operating room walls as he is to his patients’ health.

Beyerl is on the cutting edge of neurosurgery. He is co-director of the Atlantic Health Stereotactic Radiosurgery Program, the first of its kind in New Jersey. He is also a member of The CyberKnife Society — a leading group of medical professionals who work with the revolutionary radiosurgical device — and co-director of the CyberKnife program at Overlook Medical Center. But on the weekends, Beyerl trades in his scrubs and suits for deacon vestments. You’ll find him assisting on the altar during Mass and presiding over baptisms, marriages, and other life events.

On the weekends, Dr. Brian D. Beyerl trades in his scrubs and suits for deacon vestments.

Beyerl said being a deacon has made him an even better doctor.

“While rooted in science, practicing medicine is about more than the cold hard facts of biology. It’s about the warmth, trust and guidance a physician can offer to patients when they’re in their most vulnerable state,” he said. “Religion aside, being ordained as a deacon has enabled me to connect with all of my patients — regardless of their beliefs — on a deeper level by not just providing medical guidance but also moral support.”

Positive relationships between doctors and patients are linked to better health outcomes. For Beyerl, these are built on a foundation of humility, compassion and respect.

“Developing relationships with patients goes beyond simply having good bedside manner,” he adds. “People need more than a friendly physician. They need an invested partner who can guide them on their journey to better health.”

This journey includes educating patients about the reality of their situations and working together over the long-term to pursue the course of treatment that is best suited for them. It means talking seriously about the risks of brain or spine surgery rather than sweeping them under the rug while also inspiring patients to maintain hope. It means one human using his/her talent and training to help another in time of need.

Beyerl also helps community members who suffer from drug and alcohol addiction by volunteering his time at the Straight & Narrow Inc., a rehabilitation clinic in Paterson.

“Whether it’s a patient at the office, a parishioner or a person trying to get back on his/her feet, I’m humbled by all of the people I’m fortunate to interact with every day. I’m humbled by their stories. I’m humbled by the faith they place in me. And I’ll do everything in my power to help them,” Beyerl said.