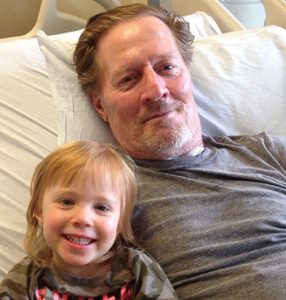 When John Corcoran, owner of Statewide Roofing and Siding in Edgewater and brother of Shark Tank millionaire, Barbara Corcoran, arrived at the hospital following a motorcycle accident, he was paralyzed. He came out of a month-long sedation moving all of his limbs.

It was Labor Day weekend … a beautiful Saturday afternoon. John Corcoran, owner of Statewide Roofing and Siding in Edgewater, and brother of Shark Tank millionaire, Barbara Corcoran, headed out to do what he loves most — take a ride on his motorcycle.

An experienced rider, Corcoran had driven through Morris County hundreds of times … but this time was different. He was on a side road when he came up to a turn too fast. His bike hit a curve and jumped across the road. Corcoran was thrown across the road where he landed atop giant concrete blocks. It wasn’t until seven hours later that his family located him unconscious in the hospital because his friend — a member of the Edgewater Police Department — pinged his phone.

“John was rushed to Morristown Medical Center,” Barbara said. “He had suffered five crushed vertebrae, 18 broken ribs and lungs that were filled with blood. Worst of all, when he arrived at the hospital, he was paralyzed, having lost all function in his legs and bladder control.”

As luck would have it, Dr. Yaron Moshel, a neurosurgeon at Altair Health, was on call in the trauma center that night. While most physicians would have considered the damage to Corcoran’s spinal cord irreversible and would not have immediately performed surgery to remove crushed vertebral fragments off of his spinal cord, Dr. Moshel set on a mission to have Corcoran walking again.

“Although no one would have expected this amazing outcome, I thought we should give John the benefit of the doubt,” Dr. Moshel said. “We rushed him into surgery to reconstruct his spine and relieve pressure from his spinal cord. It was a risky decision considering his other systemic injuries, but we had the full support of a great trauma team and were able to offer him the surgery within hours of arriving to the hospital instead of days later. When it comes to spinal cord injury, early protection of the spinal cord and not wasting precious time is critical.”

Corcoran received specialized care directed by the trauma and neurosurgery teams in the ICU for one month and came out of a month-long sedation moving all of his limbs. After a seven-week hospital stay and a two-week stay in a rehabilitation center, John returned home and began resuming his normal activities.

“I’m driving again — although I have not yet gotten back on my motorcycle … it’s in the repair shop,” Corcoran quipped. “I do plan to get back on it … I plan to ski again and do everything else I enjoy. All thanks to the fabulous team of doctors who spent hours, days and almost two months focusing on me. Without them, I wouldn’t be here today.”

Dr. Moshel added, “I was truly thankful and somewhat surprised that John emerged from his long recovery walking around as if nothing had happened. Traumatic spine injuries can be devastating and to have such a positive outcome in such an upbeat patient keeps us aware of why prompt and high-level care is so important.”

“Our whole family feels our brother’s recovery is nothing short of a miracle,” Barbara said. “We all waited anxiously knowing full well that his chances of walking again were next to zero if not for the quick thinking of Dr. Moshel and the expert care he received. It is truly amazing to see John today.

“We just returned from a short vacation to Utah where, believe it or not, he would have skied had Dr. Moshel not asked him not to,” she said. “John has nine siblings who adore him, and our mom always said John would be a big success because he is such a hard worker. It may have been the habit of working hard that helped put him on the road to recovery. He is an inspiration to us all.”
Admin2022-04-06T11:10:31-04:00