To effectively treat the father of three, Kyle Chapple, M.D. pioneered the use of the new WEB aneurysm embolization system. 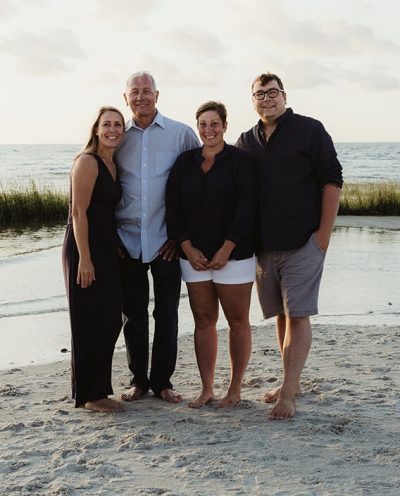 Ray Soroka used his battle with a brain aneurysm to model life lessons for his adult children.

Five years after losing his wife, Elaine, to cancer, Ray Soroka of Fredon, NJ received shocking news about his own health. At the age of 65, he was diagnosed with a large 7mm brain aneurysm.

“I remember feeling something snap in my head and upper chest, almost like a No. 2 pencil snapping in half,” says Ray. “After that, I had a dull headache for almost a week. To be safe, I went to get checked out by the neurologist. That’s when an angiogram revealed I had a brain aneurysm. Shocked doesn’t begin to describe how I felt.”

“The news threw us all for a loop, to say the least,” says Leigh Anne Soroka, one of Ray’s daughters. “We already lost our mom, and having this happen to our dad, our one surviving parent, was really scary.”

Ray was referred to Kyle Chapple, M.D., a board-certified neurosurgeon at Atlantic NeuroSurgical Specialists (ANS) – one of the largest neurosurgical practices in New Jersey and one of the most advanced in the county – for treatment.

With Dr. Chapple’s expertise and guidance, Ray, Leigh Anne and her siblings, Melissa and Raymond, were all involved in formulating a treatment plan.

“We talked with Dr. Chapple extensively about our options. We also talked about taking a wait-and-see approach since the aneurysm wasn’t growing,” notes Ray. “But from my perspective, once we knew it was there, we had to do something. I didn’t want to live in fear of it rupturing. I wanted to be fearless. I wanted to take control of my life, be proactive about my health and teach my kids to do the same.”

“Dr. Chapple is also fearless – cautious, but fearless. That’s one of the reasons we put our faith in him,” Ray adds.

The size and shape of Ray’s aneurysm, particularly the wide base, posed challenges in effectively stopping blood flow into the aneurysm.

“Even with these challenges, a minimally invasive approach was the best option for Ray,” notes Dr. Chapple. “Minimally invasive procedures often carry less risk than open craniotomies, which require opening part of the skull to access the brain, as well as significant recovery time.”

After ruling out the viability of using traditional stents or coils to block off the aneurysm, Dr. Chapple brought a new idea to the table.

“Ray was the perfect candidate for a new device called the Woven EndoBridge (WEB) aneurysm embolization system,” he explains. “This FDA-approved device is essentially a self-expanding mesh ball that’s designed specifically to treat wide-neck aneurysms in the brain. It’s placed into the aneurysm by navigating to the brain through the femoral artery in the thigh and blocks blood flow to the aneurysm.”

Ray says one of the most appealing parts of the proposed treatment was that once the device was put in, he wouldn’t have to worry about needing to undergo future surgeries for stents or coils.

Dr. Chapple proceeded with the surgery, marking the first time the WEB aneurysm embolization system was used by any of the leading neurosurgeons at ANS, Overlook Hospital or Atlantic Health System.

Following the procedure, Ray stayed at the neuro intensive care unit at Overlook Hospital for one night and was back home by noon the following day.

“I had virtually no recovery time,” Ray explains. “I felt great. In just 10 days, I was cleared to exercise and, most importantly, lift my grandkids. As my grandson said, ‘Pop Pop wasn’t broken anymore.’”