In a matter of months, Robert Karasek, DMD went from seeing patients and exercising every day to barely being able to walk. 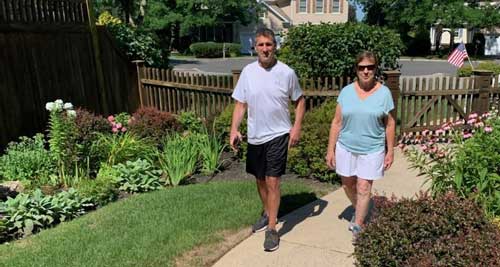 A South Jersey dentist who was practicing for 28 years, Dr. Karasek was more accustomed to being a healthcare provider than a patient, but his own medical journey – which spans more than two years – started when he began experiencing slight numbness in his hands.

Initially, he was diagnosed by an orthopedic practice with carpal tunnel syndrome, a condition dentists are known to be at increased risk for given the stress of the profession on their hands. He received corticosteroid injections in both wrists but didn’t feel any improvement.

While the numbness was still somewhat present, it wasn’t interfering with Dr. Karasek’s work or daily life until about a year later when the numbness got much worse. That’s when he went to see a hand surgeon. The surgeon’s EMG showed he didn’t have carpal tunnel after all. The diagnosis was that he had a type of neuropathy, or nerve damage that can cause numbness or pain.

“At that point, I was in a lot of pain,” explains Dr. Karasek. “I was physically getting worse and in addition to my hands, I began having a hard time walking, so I stopped working to focus on my health. I honestly feared I had something like multiple sclerosis.”

His next stop was a neurologist, and the next diagnosis he received was Chronic Inflammatory Demyelinating Polyneuropathy (CIDP), a very rare neurodegenerative disease.

“I didn’t have any of the markers for CIDP, but the neurologist was pretty well convinced,” Dr. Karasek continues.

At the neurologist’s recommendation, Dr. Karasek proceeded with an antibody infusion at the hospital over the course of five days. He came home still in a lot of pain and walking with a cane. By the second day at home, he was sure the medication was making him worse, not better.

“It was like my legs didn’t work. I could barely hold myself up and started to lose control of my bladder. I couldn’t even hold a pencil,” he added. “I was really frightened, and frankly, depressed. The neurologist told me to hang in there, that it takes time for these things to work.”

Dr. Karasek could no longer care for himself, so he moved in with his elderly parents. Within a few days of the move, he took a bad fall and ended up at Overlook Medical Center.

“In a few hours, the team at Overlook had my pain managed better than anyone I had seen in the past few years,” he says.

“We took images of Robert’s cervical spine, and it became very clear that compression and misalignment stemming from cervical myelopathy – a degenerative condition that’s commonly misdiagnosed as carpal tunnel syndrome – was at the root of his issues, not his prior diagnoses,” explains Louis Noce, MD, FAANS, a board-certified neurosurgeon and spine specialist at ANS | Altair Health, who led Dr. Karasek’s care team at Overlook. “With the state he was in, I wanted to get him into surgery as soon as possible.”

Already feeling like he had been through the ringer, Dr. Karasek was skeptical.

“It was Friday around 9 p.m., but Dr. Noce sat down with me for an hour and a half to explain exactly what was going on with my cervical spine, his approach for surgery and what my recovery might look like,” Dr. Karasek says. “It was an honest conversation, physician to physician, and it meant the world to me.”

After thinking on it over the weekend, Dr. Karasek decided to proceed with the surgery.

In the operating room, Dr. Noce recalls Dr. Karasek’s neuromonitoring baseline showing no motor functioning to his hands and legs at first.

As Dr. Noce got underway with the surgery – which entailed using a microsurgical technique to remove herniated disc and bone that were crushing Dr. Karasek’s spinal cord, and then realigning and stabilizing his neck with specially designed disc and bone prosthetics and small titanium plate – the monitoring showed instant improvement. Two days later, Dr. Karasek was able to stand and walk a few feet with the assistance of a walker.

“My legs felt different after surgery. They felt like my legs again,” he remembers. “The fact that I could stand next to my hospital bed – I couldn’t believe it.”

Dr. Karasek did three weeks of inpatient rehab learning how to walk again. On his last day, Dr. Karasek, who once feared he would be in a wheelchair for the rest of his life, walked out of the facility. Dr. Noce calls it a miraculous recovery.

“I’m still in recovery mode, but I’m walking, using my hands and even beginning to drive again. I would never be at this point if it weren’t for Dr. Noce’s incredible skill and expertise, and the terrific staff at Overlook,” says Dr. Karasek.

Building on Atlantic NeuroSurgical Specialists’ (ANS) 60+-year legacy, ANS | Altair Health is leading the way in game-changing brain, spine and neurovascular care. Together, a team of physicians and clinicians from numerous specialties are leveraging the power of integrated, evidence-based care – and guiding patients through every step of their treatment – to improve outcomes.