Skip to content
Spine Surgery is a Matter of Risk vs. Benefit

Spine Surgery is a Matter of Risk vs. Benefit

While many people shy away from back surgery, others — such as Denise Kordulak — have no choice. The benefits far outweigh the risk.

Many people who suffer from debilitating back pain resist surgery — thanks to failed stories from years past. While surgery should be the final option after trying other non-invasive therapies, today’s success rates for spine surgery are significantly different from the past.

According to the Neuropoint Alliance Spine Quality Outcomes Database (SQOD), 60 percent to 80 percent of spine surgeries result in a return to normal life in appropriately selected patients.

Take, for example, Denise Kordulak, a 66-year-old retired X-ray technician from Neptune. Years of pushing, lifting and carrying equipment and positioning patients played a huge toll on her back. Fourteen years ago, the pain was so bad and the loss of feeling in her feet was so debilitating that she had surgery. While it was somewhat successful, she never returned to normal.

In addition to never recovering feeling in her feet, Kordulak started walking with a hunched back. Last year, the pain became unbearable. Eventually, she lost feeling in her left leg from the knee down. The pain then migrated to her right leg. It was so bad she couldn’t stand for more than a few minutes without having to sit. She was in the worst pain of her life. All she would do is cry. That is when she knew she had to do something about it. 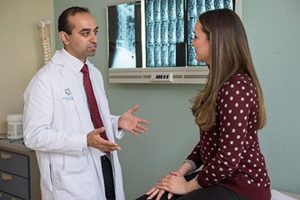 “When Denise came to me, she was suffering from a complex spine issue. Her lumbar spine had three major problems, which were causing her symptoms. Compression of the nerves was causing her leg pain. Degeneration of her discs was causing her back pain. And, one of the bones of her spine had slipped out of place, causing her hunched back,” Dr. Jethwa said. “She couldn’t walk more than four steps without getting a burning in her legs and crippling back pain. She was depressed and gaining weight.”

“The surgery we performed needed to address each of the problems causing Denise’s symptoms. First, the parts of the bones and discs that were compressing her nerves were removed,” he said. “Next, screws and rods were placed in the bones to stabilize and fuse the degenerated discs. Finally, the bone that was slipped out of place was realigned into a more normal position.”

Following a week-long hospital stay and rehab three times a week for the first two weeks post-op, Kordulak was able to walk using a walker. By the end of the third week, she was using only a cane.

“Since then, I have been pain free,” Kordulak, who has lost 30 pounds, said excitedly. “I am a completely new person. I can stand up straight again, and I can have a conversation without having to sit down. It’s amazing. I feel wonderful.”

“Denise actually drove herself to the office and, for the first time in years, walked in unassisted,” Dr. Jethwa said. “She told me she has her life back. In her case — and many others — the benefits far outweighed the risk.”