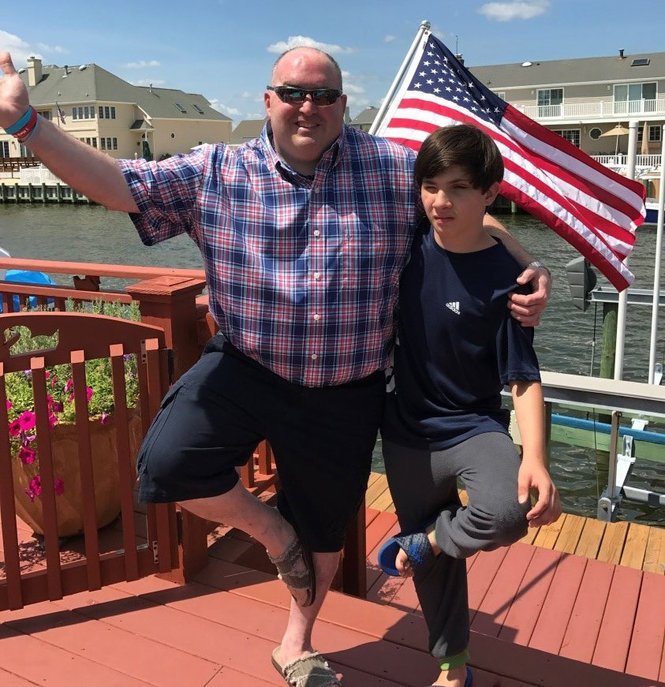 When Jamie Falstrault’s undiagnosed brain aneurysm ruptured while at home in Scotch Plains, he and his family feared for his life. Would he survive? And if he did, would he be able to walk, talk or have a decent quality of life?

“We were all in utter shock,” Falstrault recalled. “The only symptom I experienced prior to my aneurysm was extremely bad headaches. I went to the doctor three times, and all three times I was diagnosed with a sinus infection. The next thing I know, I’m feeling disoriented and sick to my stomach — and I’m being rushed to the hospital.”

Falstrault was immediately taken to Jersey Shore Medical Center and then transferred to the Atlantic Neuroscience Institute at Overlook Medical Center. At Overlook, Falstrault began seeing Dr. Ronald Benitez, a board-certified neurosurgeon at Altair Health and specialist in brain aneurysms and strokes.

“Headaches can signal many medical conditions, but sudden, highly severe headaches are a telltale sign that an aneurysm has — or soon will — rupture,” Dr. Benitez said. “Until symptoms present themselves, aneurysms often go undetected. That’s why it’s so important to know the warning signs. For aneurysms that have not yet ruptured, symptoms include pain above and behind the eye, dilated pupils, numbness or weakness and difficulty speaking. Beyond extreme headaches, other symptoms associated with ruptured aneurysms include blurred or double vision, nausea and vomiting, sensitivity to light, a drooping eyelid, seizure and loss of consciousness. If an individual or someone they love experiences any of these, insist on immediate medical attention. It’s a critical move for survival.”

Under Dr. Benitez’s care, the brain aneurysm wouldn’t be the end of Falstrault’s story. It was, however, the beginning of a difficult journey toward reclaiming his life and regaining his health.

Falstrault spent nearly a month in the intensive care unit. During his five-month-long hospital stay, he had multiple procedures, including surgery to clip his aneurysm, insertion of a shunt and several angioplasties, which use small balloons to relieve the narrowing of arteries that is often a complication of cerebral aneurysm. While in the hospital, Falstrault suffered a massive stroke that paralyzed the entire left side of his body.

Falstrault spent six months in outpatient rehabilitation, but he continued to struggle physically.

“Despite my best efforts, I was weak and I was having terrible tremors, making it extremely difficult, if not impossible, to do everyday tasks — from writing my name to eating a meal. As much as I felt like giving up at times, I was determined to persevere. Dr. Benitez saved my life and it was up to me to keep pushing myself forward,” Falstrault said.

That’s when an acquaintance who had also suffered brain injuries recommended Falstrault try yoga therapy, which is increasingly being used to supplement medical healing. He began practicing at a studio, focusing on breathing, stability and mobility exercises. After just a few months of practice and diligence, Falstrault noticed he was, in fact, becoming significantly stronger.

“I was no longer paralyzed. Like a miracle, my strength began to come back, and my shaking stopped. It has been nothing short of remarkable,” he said. “Combined with traditional medicine, yoga has been a major influence in speeding up my recovery and allowing me to regain more mobility than I once thought was possible.”

“Hope and healing comes in many forms. For me, it’s neurosurgery and yoga — a life-saving combination I am eternally grateful for,” he said.

ANS | Altair Health is New Jersey’s largest neurosurgical practice and one of the most advanced in the country. Since its founding in 1958, ANS has specialized in the diagnosis and treatment of disorders affecting the nervous system.