Skip to content
Strokes can strike at any age: Know the signs

Strokes can strike at any age: Know the signs

A 31-year-old stroke survivor speaks out on the warning signs of stroke and the importance of FAST action:

Erroneously diagnosed with a sinus and ear infection, Lindsey Singh, 31, skipped a few days of her regular morning spin class at the gym. When she felt up for working out, she resumed her morning routine, dropping off her 4-year-old son, Austin, at preschool and taking her 2-year-old daughter, Harper, to the gym’s onsite daycare before heading in to the spin studio around 9:30 a.m. It was only 15 minutes into the class when Lindsey suspected she was having vision disturbances in her right eye.

“The lights were out during the class, so it was hard to see and tell if I was, in fact, having difficulty with my vision,” Singh said. “I gave it a few minutes and then decided to step out of the room. In the daylight, I knew for sure I wasn’t seeing clearly, and by that time, I was also feeling lightheaded and dizzy. It’s exactly how I felt when I had a ministroke months earlier.”

Commonly referred to as a ministroke, a transient ischemic attack (TIA) happens when there is a blockage, often in the form of a blood clot, that obstructs blood flow to part of the brain. Symptoms mirror those of a stroke — including vision problems and weakness on one side of the body — but typically go away within minutes to hours and don’t cause permanent brain damage.

“Unfortunately, I felt like I was going down the same path as before. Fortunately, I knew the warning signs of a TIA or stroke and that I needed to get to the hospital right away,” Singh said.

“With her personal health history, Lindsey is certainly in the minority. Not only did she have a TIA at such a relatively young age, she also had the knowledge to recognize she was experiencing a stroke or a stroke-like event,” said Dr. Paul Saphier, a board-certified neurosurgeon and stroke specialist at Altair Health, who would end up treating Lindsey. “While most strokes occur in patients over the age of 65, strokes can strike at any age. The difference is most younger patients don’t consider strokes to be in the realm of possibility, which puts them at risk when the speed of medical care is of the essence.”

“These are the major warning signs, but there are also many other indicators to look out for. This is why it’s so important for people like Lindsey to tell their stories and educate others for the benefit of their own health,” he said.

Singh’s journey had just begun when she arrived at the Hackettstown Medical Center with her husband, Avtar. In the short ride to the hospital, her vision recovered, but she proceeded with the medical evaluation given her history. It was during this examination that doctors made a shocking discovery: One of the carotid arteries in her neck — a main blood vessel that supplies blood to the brain, face and neck — was dissected and 90 percent occluded, or closed off. If they hadn’t intervened, Lindsey would have had a major, life-threatening stroke, despite her outward symptoms resolving.

She was immediately transported by medical helicopter to the Stroke Center at Overlook Medical Center in Summit. There she underwent several angiograms to better assess the health of her arteries before stroke specialists placed a stent in her neck to open the occlusion in her carotid artery.

“After the stenting procedure, I was recovering fairly well in the hospital for three days,” Singh said. “The stroke was definitely tough on me physically and emotionally, but I was scheduled to be discharged a few days later and I thought the hardest part was behind me.”

Before she was discharged, Singh’s health began to deteriorate quickly. Her right arm was going numb, her speech was slurring and she was confused. Observing signs of the imminent onset of a traumatic stroke, the team at Overlook called in Dr. Saphier, a leader in stroke care, to leverage his expertise in endovascular neurosurgery and give her a fighting chance for survival. 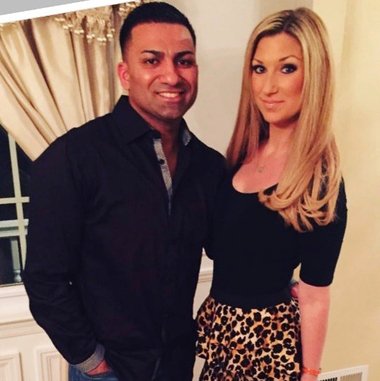 Lindsey Singh, with her husband Avtar, has resumed much of her normal life after nearly experiencing a major stroke at age 31.

“This was a life-or-death moment for my wife,” said Avtar, who feared for Lindsey and their young family. “Things weren’t looking good for her. At a time when it felt like both of our lives were on the brink of completely falling apart, Dr. Saphier joined Lindsey’s medical team in the most supportive, knowledgeable manner possible. He explained the complex stenting procedure that would offer Lindsey the best chance of reclaiming her life. The risks were considerable, but we knew we were in good hands.”

During this high-risk procedure, complicated by Singh’s fragile vascular system — which she would later learn is due to a rare syndrome called Ehlers Danlos — Dr. Saphier succeeded in preventing her from experiencing a major stroke.

Following surgery, Singh made an awe-inspiring recovery. Faced with having to learn how to control her body, walk and talk again, she quickly progressed in physical and speech therapy. Within one month, she began taking steps and could speak fluidly. Just six months after surgery, she has resumed much of her normal life and continues to make progress in the last leg of therapy to strengthen her right arm and hand.

“I used to wonder if I would make it out of the hospital or ever be able to function as an independent adult again,” she said. “Not only am I still here to enjoy every day with my family, my life looks a lot like it did before this crazy roller coaster began.

“Let my story be a wakeup call that strokes don’t discriminate. No matter your age, know the warning signs and don’t hesitate to get medical help. It could save your life,” she said.