Susan Pisarchik, 48, discovered her symptoms weren’t just signs of middle age and that she needed to undergo complex brain surgery at the base of her skull – quickly. 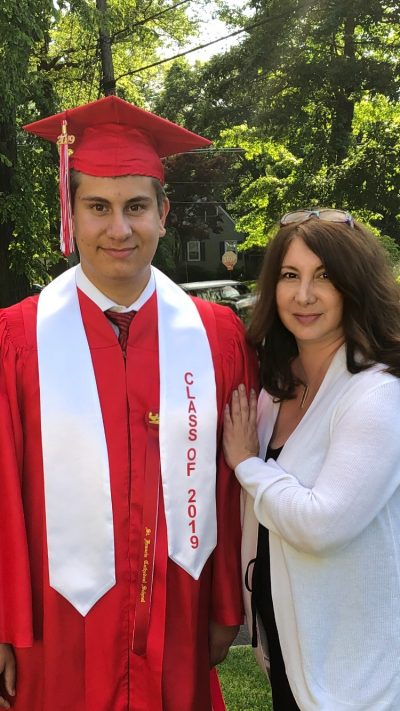 Like many parents, Susan Pisarchik was inundated with everything that comes along with having teenagers. Her 14 year old was in eighth grade and her twins were seniors in high school, which meant SAT testing, college tours and applications on top of the usual hustle as a single working mother. With the hectic pace of life, Susan – who had persistent ringing in her ear and was experiencing frequent headaches – says she just kept dealing with her symptoms.

“For a while I thought I just needed better reading glasses and that what I was experiencing was part of being middle age,” recalls Susan. “When I went to my general practitioner, I was diagnosed with tinnitus – constant ringing in the ear sometimes associated with age-related hearing loss – but my symptoms only got worse, and I began to lose my vision.”

Susan’s doctor ordered an MRI. The scan revealed a left frontal meningioma, a type of brain tumor that forms on the inner lining of the skull, which normally protects the brain. While most meningiomas are benign and grow on the surface of the brain, Susan’s was remarkably large and growing under the brain, at the skull base, where the optic nerves meet the pituitary gland. She needed urgent neurosurgical attention.

“During my first appointment with Dr. Moshel, he literally sat down with me for an hour and a half. Using my MRI and models of the brain, he showed me exactly where the tumor was, how he would approach the surgery and what I could realistically expect,” Susan explains. “It wasn’t at all like the ‘in and out’ I had experienced with other physicians.”

“Because of its size and placement at the skull base, the meningioma was impinging on Susan’s carotid artery, optic nerves and frontal lobes, hence the headaches, vision loss, ringing in the ear, dizziness and vertigo. Her brain was swelling and it was clear the tumor needed to come out quickly,” says Dr. Moshel.
Susan was first concerned for her children. It was the end of the school year and seeing her kids off to prom and at their graduations wasn’t something she could fathom missing.

Dr. Moshel worked with Susan to create a plan that would allow her to get the treatment she needed and be a part of these milestones for her kids.

“We don’t treat patients – we treat people,” continues Dr. Moshel. “Our plan was driven by what was best for Susan, not just medically, but as a whole person.”

After attending her son’s eighth grade graduation ceremony, Susan went straight to Overlook in Summit, NJ. The next day, Dr. Moshel performed a craniotomy, or open brain surgery, using an anterior skull base approach that enabled him to access the tumor from under the brain, without risking damage to her already swollen frontal lobes. Over the course of approximately seven hours, he skillfully removed the entire meningioma, including scraping every piece of tumor off of Susan’s carotid artery and optic nerve.

She spent nearly a week recovering in the hospital and a few additional days at in-patient rehab as she began to regain her strength. Susan returned home exactly 10 days later – just in time to see her twins graduate from Metuchen High School.

“These are the moments you live for.” says Susan.

Since then, she got her twins off to their freshman year at The College of New Jersey and Middlesex Community College, started her youngest in the ninth grade at St. Joseph High School in Metuchen and returned to work as a home infusion nurse, all within just three months of her surgery.

Susan adds, “I can never thank Dr. Moshel enough for his expertise, care and compassion, enabling me to be there for my kids when it mattered most and to be here where I am today. I’m so thankful for the entire community that rallied around me and my family, and I will be forever grateful.”