With a chronic stiff neck, sporadic numbness in her arms and anxiety about what was really at play, Suzan Kip of Summit, New Jersey knew she needed medical attention. What she didn’t know was that her neck, or cervical spine, was so severely damaged that she was actually at risk of becoming a quadriplegic.

“I had neck issues my whole life, but I just coped with them,” explains Suzan, who believes her injury initially stemmed from a car crash when she was in her 20s. “I didn’t want to be a complainer, so I did my best to ignore the pain. Clearly, I shouldn’t have.” 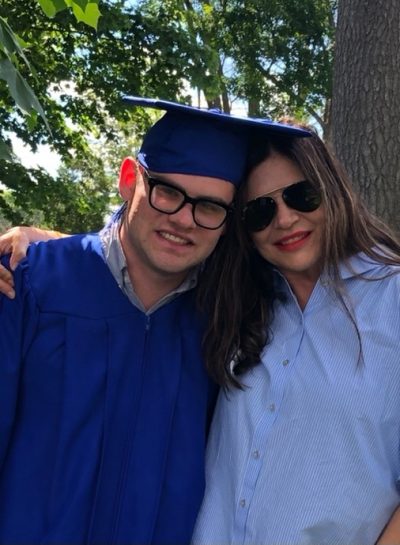 After recovering from having her entire neck reconstructed by leading neurosurgeon Dr. Jay Y. Chun and a team of top specialists, Suzan Kip celebrated her son Shayne’s high school graduation.

While working in the office before COVID-19, Suzan, a meeting planner in the pharmaceutical industry, started experiencing tingling and numbness in her fingers and arms. She thought it might have been the start of carpal tunnel syndrome, but over a matter of months, the numbness got progressively worse.

“I remember one particular instance when the numbness went from my fingers all the way up my arm. That time, it was so severe I couldn’t shake it and move on. I was so scared I thought I was going to have a heart attack,” says Suzan.

A visit to the doctor revealed her heart and overall health appeared to be fine. When Suzan followed up with her primary care doctor, the physician suspected she was dealing with a pinched nerve. She had an X-ray done and was told she didn’t need surgery, but that she needed to see a pain medicine specialist for injections.

In the meantime, COVID-19 had begun to take hold in the U.S., Suzan’s symptoms were manageable, so she sat tight while quarantining with her son, Shayne, who came home from boarding school during the pandemic. About three months later, just a few days after Shayne returned to school, Suzan’s legs went completely numb. She immediately called the pain medicine specialist and had an MRI done.

“He called me first thing the next morning and told me I needed surgery yesterday,” Suzan shares. “He was very concerned, as was I. Thankfully, he also told me he had already contacted a leading neurosurgeon, Jay Y. Chun, MD, PhD, to help me. I quickly looked him up and was blown away by his expertise. I said I’m not going anywhere else but to see Dr. Chun.”

Suzan says when she met Dr. Chun – a neurosurgeon at Altair Health and Chief of Neurosurgery and Director of the Atlantic Health Neuroscience Spine Center at Overlook Medical Center – for a telemedicine appointment, she was even more impressed.

“He has the most incredible, soothing, kind, spiritual way about him,” she says. “He’s so calming and graceful. He’s one of those doctors you think just don’t exist anymore.”

During the appointment, Dr. Chun explained that Suzan had spondylosis – which is arthritis from age-related wear and tear on the spine – and myelopathy, or compression of the cervical spinal cord.

“Suzan had one of the most severe cases of cervical spine damage that I have ever seen,” Dr. Chun explains. “If it wasn’t repaired, eventually the bones would be squeezing Suzan’s nerves so tightly that she would wake up one day and not be able to move. Worse, if she were to have slipped or fallen, there would be a risk of severe and catastrophic neurological injury.”

“Fortunately,” he adds, “we have the advanced technology and expertise that allow us to reconstruct the cervical spine, even when there is extensive damage. This entails replacing the damaged discs in the neck with substitute discs that stabilize the vertebrae and relieve nerve compression.”

Dr. Chun advised Suzan that she needed to be extremely cautious, wear a neck brace and not take it off until her surgery.

After carefully studying Suzan’s case, Dr. Chun assembled an integrated spine team of nearly a dozen experts to join him for the surgery – including neurologists, spine specialists and neuro-anesthesiologists to help ensure Suzan received the best possible care.

“When we began operating, Suzan’s case was actually much more severe than the scans revealed,” notes Dr. Chun. “Over the course of nearly nine hours, we meticulously reconstructed her entire neck from her C2 to C7 vertebrae using substitute cervical discs, plates and six titanium nails.”

Waking up from the procedure, a sigh of relief washed over Suzan as she wiggled her toes. While her recovery had its ups and downs, her symptoms have resolved and she is back to living her normal life. She acknowledges what an important role her caregivers played in getting her to where she is today.

“Dr. Chun saved my life. As a doctor, he gave me the gift of healing and the inspiration to have the strength to fight from within,” she says. “Words are ineffective in expressing my complete gratitude for all he has done for me, but I will be forever grateful.”

Suzan was also so moved by the care she received from neuroscience nurse René Cardoso at Overlook, she nominated him for The DAISY Award For Extraordinary Nurses – an honor he was selected to receive based on her recommendation.

“I feel Iike a miracle walking around,” Suzan adds. “It’s almost like God plucked me from the wreckage and said he’s giving me another shot.”