Skip to content
Technology That Is Transforming Brain Surgery

Technology that is
Transforming Brain Surgery

Last March, Lisa Vidal was on a Zoom call when she noticed the right side of her face appeared to droop. A few days later, at her daughter’s lacrosse tournament, a friend spotted the same thing and suggested it might be Bell’s palsy, a temporary weakness of facial muscles.

Lisa – a preschool teacher, wife, and mother from Branchburg – consulted her family physician, who prescribed a steroid and ordered an MRI. At the imaging center on March 31, she got the shock of her life.

Technology That Is Transforming Brain Surgery 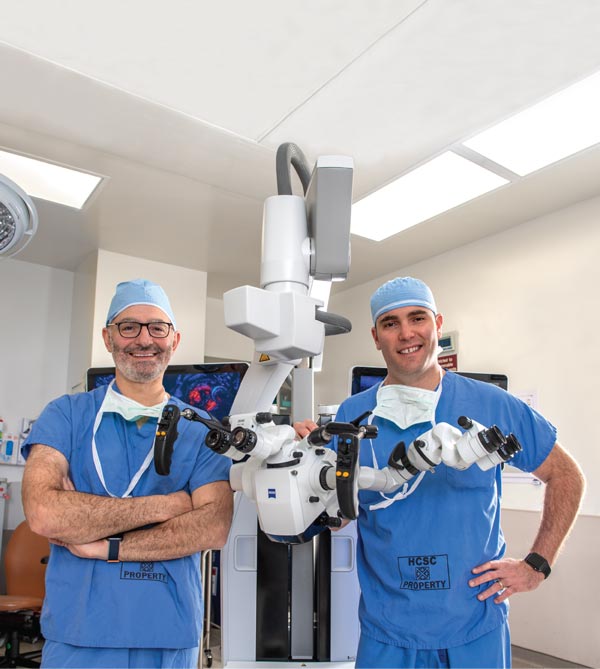 Last March, Lisa Vidal was on a Zoom call when she noticed the right side of her face appeared to droop. A few days later, at her daughter’s lacrosse tournament, a friend spotted the same thing and suggested it might be Bell’s palsy, a temporary weakness of facial muscles.

Lisa – a preschool teacher, wife, and mother from Branchburg – consulted her family physician, who prescribed a steroid and ordered an MRI. At the imaging center on March 31, she got the shock of her life.

“They told me I had a mass on the right side of my brain,” remembers Lisa. “They wouldn’t allow me to drive home. In fact, they recommended I go straight to Overlook, which they said has an excellent neuroscience program.”

As she and her husband, Manny, drove to Overlook’s Emergency Department, they called family members and friends, who confirmed they were headed to the best and most convenient neuroscience center in the region. They also offered their support at home with the Vidals’ children – 14-year-old twin daughters and two sons, ages 18 and 21.

Following additional MRI scans, the Vidals met with Yaron Moshel, MD, PhD, a neurosurgeon at Altair Health and co-director of the Gerald J. Glasser Brain Tumor Center. Dr. Moshel explained that Lisa had a tumor located in a deep-seated area of the brain called the insula (which plays a role in regulating numerous functions including emotion, perception of pain, motor control, and sense of self). He said the tumor was, most likely, malignant and needed to be surgically removed.

Despite the life-changing diagnosis, Lisa says, Dr. Moshel and the entire staff made them feel comfortable every step of the way. Nicholas Metrus, MD, a neuro-oncologist, put them at ease, explaining every detail about the treatment plan. Patient and family advocate, retired neurosurgeon and ordained Catholic deacon Brian Beyerl, MD, FACS, and social worker Janet LeMonnier provided vital emotional support. “Beth, the nurse practitioner, was also so knowledgeable, sweet, and comforting. She braided my hair so only a small patch needed to be shaved.”

On April 2, the morning of the surgery, Lisa Face Timed with her family and told Manny, “If I survive this, I want to renew our wedding vows.”

That morning, Lisa also did something novel among most brain tumor patients. She drank a pink liquid that made her tumor glow. The Glasser Brain Tumor Center is one of the first in New Jersey to incorporate fluorescent imaging to help surgeons distinguish malignant from healthy tissue in glioma brain tumors, which typically lack defined biological boundaries. Patients ingest 5-ALA, a fluorescent tracer that circulates throughout the body. The tracer tags abnormal brain tumor cells by illuminating them a bright pink color that can be seen with the specialized filters of Overlook’s newest high-tech microscope, the Zeiss Kinevo® 900 (funded by donations to Overlook Foundation). This cutting-edge robotic visualization system, together with Stealth Navigation 3D images, allows neurosurgeons to safely remove malignant tumors in some of the most difficult-to-reach locations with pinpoint accuracy.

“The combination of these technologies absolutely improves the quality and outcome of our cases,” comments neurosurgeon Fabio Frisoli, M.D., who became proficient in the use of the Zeiss Kinevo® during his fellowship in brain tumor and skull base surgery at Barrow Neurological Institute. “The surgical corridor in which we are working is no more than an inch or two. In the past, we would need to reposition the microscope with our hands, look up at a screen displaying an MRI, and turn back to the operating table. The Zeiss Kinevo® has both a mouthpiece and foot pedal, allowing us to seamlessly maneuver the robotic microscope during surgery with automatic zoom and focus adjustments. Our hands never leave the surgical field, and the heads-up display allows us to see everything right in front of us. With the added benefit of fluorescence, we can remove more tumor and spare healthy tissue with a whole new level of safety, certainty, and efficiency.”

Prior to surgery, Dr. Moshel predicted he might be able to remove 40-50% of Lisa’s tumor. After the surgery, the MRI showed he was actually able to remove 80-90% of it, thanks largely to the Glasser Center’s leading-edge visualization tools.

“I’ve never had surgery, and my first was brain surgery!” remarks Lisa. “God knows you don’t want to hear that, but what impressed me most was the support and caring we received from every person we encountered at Overlook. From the medical team, including Dr. Metrus’ nurse, Angela Davis, who was available to address our concerns, to radiation oncologist Joana Emmolo and the radiation oncology technicians, the nurse who always greets me and offers me lunch at the infusion center, the virtual support group in which we participate, and the physical therapist who genuinely wants me to get back to where I want to be – they have all made such an impact on my life.”

“Few centers across the country offer a multidisciplinary service that works so closely together to offer patients access to the highest quality and groundbreaking treatments,” points out Dr. Frisoli. 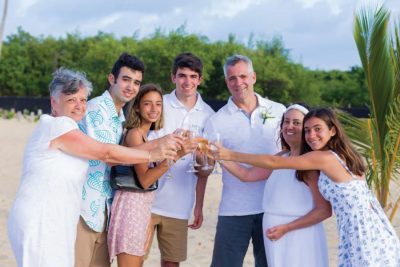 Lisa and Manny Vidal (second and third from right) enjoyed a special vow renewal in the Dominican Republic with Lisa’s mother Marcie, and children Nicholas, Kiera, Manny, and Maia.

Last August, Manny fulfilled Lisa’s pre-surgery wish. Surrounded by 18 friends and family members, they renewed their wedding vows in the Dominican Republic. In the coming months, they plan even more family getaways. “Every day is a gift,” says Lisa.