When actress and New Jersey native Veronica James made her debut appearance on the Netflix series “Unbreakable Kimmy Schmidt” earlier this year, it wasn’t just a thrill to be on a hit TV show. Having worked in the entertainment industry for 30 years, she’s no stranger to the stage or the screen. But after three near-death experiences – resulting from a ruptured brain aneurysm – this accomplishment spotlights just how far she has come since her stroke. Her story of survival offers hope to others who have suffered brain aneurysms.

It all started with a typical summer day at the beach when Veronica was vacationing with her boyfriend, Paul Wargelin.

“We came out of the water, and something hit me – hard,” recalls Veronica. “My back seized up. I had terrible pain in my back and I fell down in the sand. I couldn’t walk.”

Off-duty nurses and an off-duty lifeguard rushed to help her. They called EMTs to rush her to the hospital. 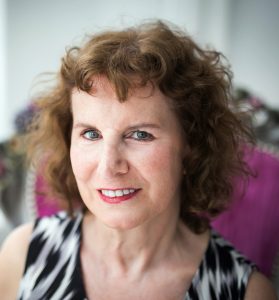 Upon arrival at Jersey Shore Medical Center, Altair Health neurosurgeons uncovered that Veronica had a potentially fatal ruptured brain aneurysm, as well as two serious complications: vasospasm, in which the normal arteries of the brain shrink down and can lead to a major stroke if not treated quickly, and hydrocephalus, which occurs when the bleeding from the rupture causes fluid to exert increased pressure on the brain.

Veronica underwent three brain surgeries in three weeks. The first surgery was to stop the aneurysm from bleeding with a minimally invasive approach called coiling, during which small platinum coils are packed into the aneurysm to block it from the inside. To treat the vasospasm, a second surgery was required, which involved taking a tiny balloon up into the arteries in the brain and dilating them to improve the blood flow. The third operation was to place a shunt to treat the hydrocephalus and normalize the pressure on her brain. Each time, she only had a 50 percent chance of making it through the surgery and, yet, she survived.

Following the surgeries, Veronica was in the Neurosurgical Intensive Care Unit for three weeks, requiring a feeding tube and “being hooked up to every tube under the sun,” as Paul remembers. She then graduated to acute and sub-acute rehab, where she learned to walk and talk again, and later continued with extensive speech, physical and occupational therapy at home.

“After medical negligence that tragically took my mother’s life, I was honestly scared of going to the hospital. In fact, I think my mother’s negligent care and the tsunami of ensuing stresses – coupled with my high blood pressure – are what caused my aneurysm in the first place,” Veronica explains. “Thankfully, my fears were turned on their head. I have been so blessed to have had the entire medical team I did. I wouldn’t be around today if it weren’t for them.”

After a long and difficult road to recovery, Veronica is not only walking and talking, but also living independently, driving, exercising and back to work as a member of the Screen Actors Guild. She’s also active with the Brain Aneurysm Foundation, encouraging those who are eligible to get screened for aneurysms, and advocating for everyone to take care of their bodies. She believes following a healthy diet and exercising regularly before her medical episode played a big role in her recovery.

Most brain aneurysms are asymptomatic until they rupture, but screening for them is a good idea for people who have a family history of aneurysms or have had an aneurysm in the past. Veronica didn’t have either, but she does have a family history of high blood pressure. If you have an aneurysm, high blood pressure – as well as cigarette smoking – increases the risk of rupture and hemorrhage into the brain.

Medical details aside, Veronica’s story is one of an incredibly strong will and perseverance. She’s what we consider a gold standard for stroke patients and she’s living proof of what they may be capable of achieving after enduring serious trauma.