Why the Worst Headache of Your Life Calls for Emergency Care

How ‘S.E.E.I.N.G.™’ saved an active and otherwise healthy executive’s life

That’s what a prominent, retired Florida executive told her husband when he said he was going to take her to the Emergency Room for her migraine. Accustomed to high-pressure life in the C-suite and the hectic pace of managing Board commitments post retirement, she knew how to power through just about any challenge – including occasional blinding migraines – without missing a beat. But when she couldn’t sleep off what she called the worst headache of her life while in New Jersey for a Board meeting, her husband insisted.

“She was weak and unsteady on her feet, but she wasn’t slurring her speech, showing signs of her face drooping or acting confused,” he explained, as he had considered the possibility that his wife was having a stroke. “She even stopped to brush her teeth before we left for the closest hospital.” 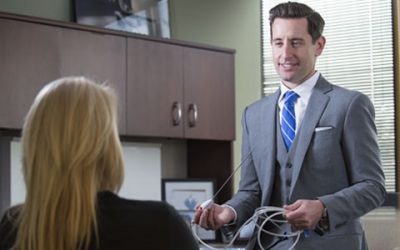 It wasn’t until they arrived at the hospital 30 minutes later that those symptoms became apparent. Then CAT scans revealed a brain bleed at the end of her neurovascular system.

“It’s fairly common for a patient who is experiencing a hemorrhagic stroke, or brain bleed, to describe him or herself as suddenly having as the worst headache of their life,” explains Dr. Paul Saphier, a board-certified endovascular neurosurgeon and stroke specialist at Atlantic NeuroSurgical Specialists (ANS) who handled this case. “In reality, these headaches are much more than migraines. They are the symptoms of a life-threatening condition that calls for emergency medical care, regardless of whether or not the patient is showing any other stroke symptoms.”

The American Heart Association and American Stroke Association advise that people can spot the signs of a stroke F.A.S.T. – looking for face drooping, arm weakness, speech difficulty and knowing that it’s time to call 911 if any symptoms present themselves, even if they go away on their own.

“In select cases where the patient’s bleeding and blood pressure are stabilized, the body can resolve the brain bleed by slowly reabsorbing the extra fluid without any intervention,” says Dr. Saphier. “This was not one of those cases.”

Rather than perform an open craniotomy, Dr. Saphier brought an advanced treatment option to the table – which he is spearheading at Overlook Medical Center – called S.E.E.I.N.G., short for Surgical Endoscopic Evacuation of Intracranial Hemorrhage with Neuro-navigational Guidance.

Using sophisticated imaging and technology, this minimally invasive procedure allows surgeons to remove large brain hemorrhages through incredibly small incisions in the skull. This allows effective treatment of the most dangerous brain hemorrhages without exposing patients to the risks of a large open surgical procedure.

“Following the operation and short recovery, I was fortunate to be able to pick up where I left off,” says the self-proclaimed health-conscious, fitness enthusiast.

Less than one month after being admitted to the hospital in a near fatal condition, she was discharged from acute rehab and cleared to travel back home to Florida. Now she is back in full swing with her Board activities, walking 5 miles every morning and is regular again at workout sessions.

“Thank goodness Dr. Saphier was on call the night I came in and that he took the approach he did. Otherwise, I might not be here today, or be back to living my life on my terms,” she shares. “S.E.E.I.N.G. really is believing, and I’m living proof of the promise this new approach to treatment holds.”